Displaying 1 - 10 of 21
Continuing the same trend we’ve seen over many months, Congress has not made progress to address the crisis of gun violence, but federal inaction hasn’t stopped states from enacting their own laws. In Oregon, Governor Kate Brown signed into law the Oregon Firearms Safety Act, which will make background checks universal on all gun sales in the state, making it the eighth state to do so. And on the other side of the Columbia River, Washington enacted the Sheena Henderson Act, which allows family members to be notified when police return guns to loved ones, when those guns had been taken for safety considerations. The act was named after a Spokane woman who was shot to death the day after police returned guns to her husband who suffered from mental illness after he was judged not to be a safety threat.
NFTY and the RAC are teaming up next Tuesday, June 2 to take part in “Wear Orange,” a new national campaign to honor the 31,000 American lives lost each year to gun violence on the inaugural National Gun Violence Awareness Day. Wear Orange is call for action to reduce gun violence in the United States, and we’d love for your congregation to join us in this important campaign!
Image 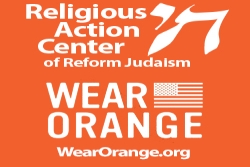 The Reform Jewish community, via the Religious Action Center of Reform Judaism (RAC) and the North American Federation of Temple Youth (NFTY), are partnering with a broad coalition of national organiz

On Thursday, the 15th anniversary of the historic Million Mom March, NFTY and the RAC announced that we would be founding partners in “Wear Orange” (www.WearOrange.org), a new campaign to reduce gun violence in America. The campaign honors the 88 Americans whose lives are cut short by gun violence every day -- and the countless survivors whose lives are forever altered by shootings each year – by designating June 2, 2015 as the first annual National Gun Violence Awareness Day. And we’re inviting you – especially Reform Jewish teens -- to take part! Everyone who agrees that we should do more to save lives from gun violence to do one simple thing: Wear Orange.

NFTY and the RAC are partnering with a broad coalition of national organizations to promote “Wear Orange,” a new national campaign to end gun violence in America. As part of the first National Gun Violence Awareness Day on June 2, the campaign is asking supporters to wear orange as a sign of solidarity and commitment to change in the face of an all too tragic status quo.

In late April, Nigerian armed forces rescued 93 women and 200 girls who had been held by the terrorist group Boko Haram. When news broke of the rescue, there was early hope that these girls were the schoolgirls abducted from a Chibok school in April of last year—the subjects of the global campaign to “Bring Back Our Girls.” It turns out this was a different group of girls and women altogether, 300 of nearly 2,000 kidnapped by Boko Haram since the beginning of 2015. It is not clear how long these women were held, but we do know from their testimony that Boko Haram subjected them to extreme violence, including rape, forced marriage and sexual slavery. We sigh with relief that these women are no longer captive, while we offer prayers for those still in captivity, and for mental, physical and emotional healing for those who have been freed as they begin to rebuild their lives.
Two weeks ago, on April 25, the global community celebrated World Malaria Day, a day when advocates around the world raised awareness and took action to end malaria. Leading up to the day, a number of champions in the fight against malaria, including three of our college fellows, shared their stories on the RAC blog. We were also thrilled to celebrate World Malaria Day at Consultation on Conscience, the Reform Jewish Movement’s flagship public policy conference which began the day after World Malaria Day.
On Sunday, we celebrated the incredible mothers, aunts, grandmothers, sisters in our lives. . While Mother’s Day is an important moment to show our mothers how much we love and appreciate them, we also know that there are so other ways to do so year round. We know that we can advocate for a society with equal pay for equal work, where we not only provide domestic violence victims  with the best access to care and services, but we work to end violence against women, that gives all workers paid sick days, and where workers are paid a fair wage. 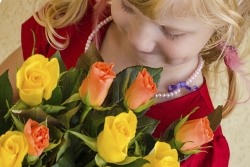 While Judaism does not have an equivalent to the secular Mother’s Day, Reform Judaism has been at the forefront of including women in religious life as equal partners.