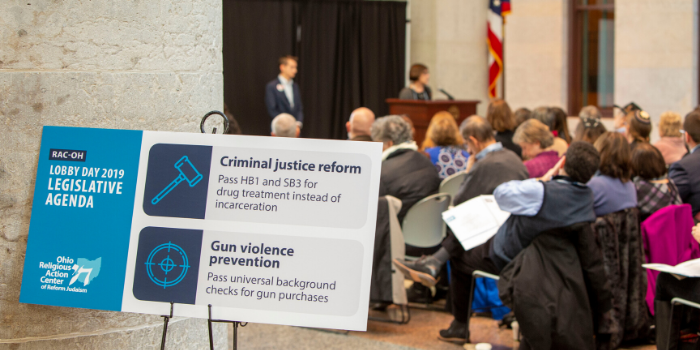 On Wednesday, nearly 200 Reform Jews from across Ohio gathered at the Statehouse in Columbus to advocate for just policies in the Buckeye State.

Participants learned about RAC-OH’s legislative priorities: gun violence prevention and criminal justice reform. Not only did they study the specific legislation, but also the impact gun violence, substance use disorder, and incarceration have on everyday Ohioans.

Dr. Abbie Youkilis, a member of Isaac M. Wise Temple in Cincinnati, spoke of the tragedy her own family experienced when her niece was murdered in Parkland. She asked legislators how many people had to perish before they acted? She also drew on her training as a physician. “Gun violence is not pancreatic cancer,” she said. “We know the cure.”

Sammy Caruso, an activist with March for Our Lives and member of Temple Israel in Dayton, offered the prescription: universal background checks and comprehensive gun violence prevention legislation.

“Today we are here to make the actual change happen. Not just talk the talk but walk the walk,” said Caruso.

Cala, a Columbus resident who has worked with Temple Israel and asked that her last name not be used, shared her personal journey through recovery and the criminal justice system. She emphasized the difficulty of getting back on her feet, and struggles others in her family have faced with felony drug convictions: “With the criminal record hanging over our head, we can’t help but be uncertain about the future.” She instead urged treating substance use disorder as a disease, rather than a crime.

Sen. John Eklund, a Republican state lawmaker and sponsor of S.B. 3, which would make many felony drug charges misdemeanors, reiterated the importance of addressing the root causes of cyclical poverty, substance use disorder, and incarceration. Sen. Eklund explained that S.B. 3 focuses on three things: public safety, stigma, and redemption.

Inspired by the stories and empowered with knowledge of the issues, attendees broke into small groups to prepare for meetings with their local representatives and state senators. Then they spread out across the Statehouse and Riffe Center for 25 meeting with legislators from across the state. Each lobby group incorporated their own personal stories and Jewish teachings into their meetings, emphasizing why Ohio Jews care about criminal justice reform and gun violence prevention.

During the lobby day, attendees learned about how to advocate for change not only through lobbying, but also through citizen initiatives. Representatives from Ohioans for Gun Safety, including members of the Ohio Reform Jewish community, spoke about the citizen initiative for universal background checks. They are currently collecting signatures to bring universal background checks in front of the Ohio legislature. If the legislature fails to act, the provision will go on the ballot for Ohio voters to decide. Attendees were given the opportunity to sign the petition and bring back petitions to their own congregations.

The RAC-OH lobby day ended with the teens, rabbis, lay leaders and congregation members in attendance signing shehecheyanu, the blessings of firsts and special moments, in the atrium of the statehouse. The largest ever RAC-OH lobby day with nearly 200 participants joining together to learn and advocate was truly a shehecheyanu moment, and RAC-OH’s work continues. To learn more about RAC-OH’s ongoing advocacy on criminal justice reform and gun violence prevention, visit rac.org/ohio.

END_OF_DOCUMENT_TOKEN_TO_BE_REPLACED 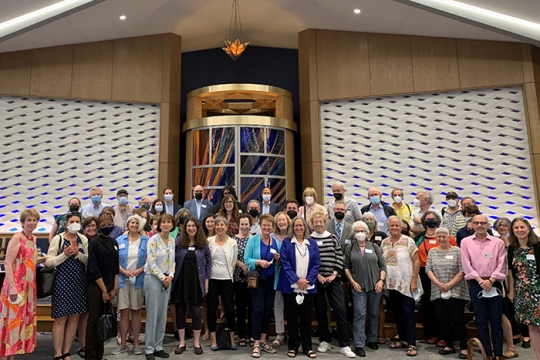