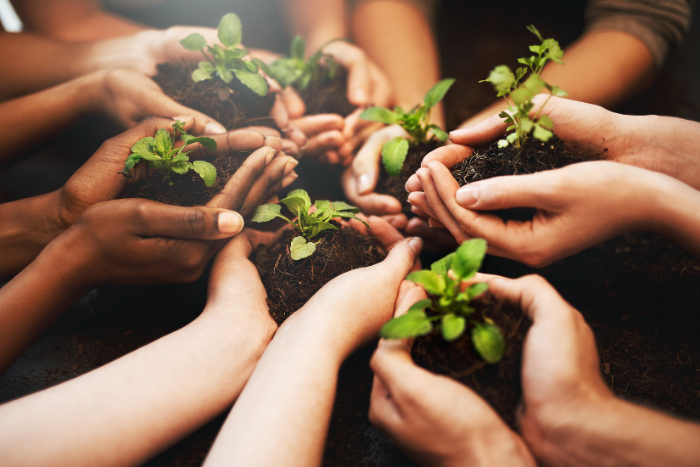 Editor's note: This article was originally published on 4/14/2021

Jewish teachings about environmental stewardship emphasize our responsibility to protect Creation for future generations. In the Garden of Eden, God instructs Adam and Eve: “Take care not to spoil or destroy My world, for if you do, there will be no one to repair it after you” (Midrash Ecclesiastes Rabbah 7:13). Although Judaism frames our responsibility to care for the planet in forward-looking terms, our commitment to environmental protection requires that we look backwards, too. We must consider the connection between historic injustices, who bears the burdens of environmental harm, and solutions to correct these injustices.

In North America, People of Color are disproportionately exposed to environmental hazards and lack equal access to environmental benefits. For example, Black Americans breathe air that is 38 percent more polluted than the air white people breathe. This concept, known as environmental injustice, was first articulated by grassroots leaders of Color in the 1980s. As the white-led, mainstream environmental movement focused on the degradation of nature, People of Color organized around the environmental harms affecting their own communities: the contaminated water they drank, the polluted air they breathed, and the toxic waste sites in their neighborhoods.

The concentration of environmental harms in Communities of Color is no coincidence—it is the product of centuries of systemic racism, including a New Deal-era policy called redlining. During the Great Depression, the federal government established the Home Owners’ Loan Corporation (HOLC) to provide emergency relief and support homeownership. HOLC created “residential security maps” to determine the supposed “riskiness” of lending in any given neighborhood, explicitly basing its designations on race rather than proof of creditworthiness.

HOLC mapped white neighborhoods in green, labeling them safe investments, and Black neighborhoods in red, deeming them unsuitable borrowers. This practice of redlining locked Black families out of homeownership, entrenching residential segregation and racial wealth inequality. Federal disinvestment from Black neighborhoods meant lower property values, making them more attractive to projects like highways and industrial sites that required a lot of cheap land. Later, as courts began to strike down racial zoning, some highways were purposefully built as barriers between Black and white communities to prevent integration.

Although the Fair Housing Act of 1968 formally outlawed housing discrimination, the devastating legacy of redlining persists. The National Community Reinvestment Coalition found that historically redlined neighborhoods have a greater prevalence of risk factors for COVID-19, such as high levels of exposure to air pollution.

Another groundbreaking new study shows that redlined neighborhoods are an average of five degrees Fahrenheit warmer than non-redlined neighborhoods within the same metropolitan areas. In some cities, the temperature difference rises as high as 20 degrees Fahrenheit. Cheap land and politicians’ disregard for local opposition led to the placement of heat-absorbing projects—industrial sites, highways, and large building complexes, all made with asphalt and concrete—in redlined neighborhoods. Those additional degrees can have fatal consequences: the CDC has found that excessive heat causes more than 600 deaths per year in the U.S. Meanwhile, green-rated neighborhoods enjoy the benefits of denser tree canopy, which provides shade and cools down streets.

Redlining bears significant responsibility for the racially inequitable impacts of COVID-19 and climate change. The latest report of the Intergovernmental Panel on Climate Change (IPCC) highlights the dangerous consequences of such inequity. Even if we achieve the goals of the Paris Agreement and limit warming to 1.5 degrees Celsius, sea levels will rise by six to ten feet, droughts will occur more regularly,  and extreme heat waves will happen five times as frequently. Developing countries that have contributed the least to carbon emissions will feel the most catastrophic effects of climate change, and within the United States, residents of redlined communities will continue to suffer disproportionately.

The new IPCC report underscores the urgency of curbing carbon emissions and preventing worst-case scenarios. As Congress debates recovery legislation, the need for climate action is clearer than ever. A comprehensive recovery package must make unprecedented investments to mitigate climate change and repair the harms of systemic racism that leave Communities of Color most vulnerable to climate-fueled disaster. In contrast with New Deal-era redlining, Communities of Color must be the beneficiaries, not the victims, of today’s economic recovery.

Going forward, Congress must also pass the Environmental Justice for All Act (S.872/ H.R. 2021), a bill crafted in consultation with directly affected communities. The bill would strengthen civil rights law to provide greater legal recourse for victims of environmental racism and require environmental justice to be considered in permitting decisions, among other provisions.

Here are some steps you can take to advocate for climate action and environmental justice: