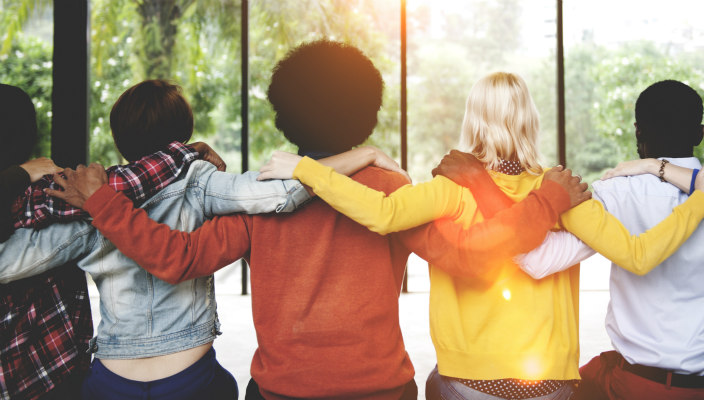 Maybe you’ve heard this one: In the days of World War II, in early November, a sergeant at an army base in the Deep South gets a call from a woman. She says, “Sir, we live near the base, and for Thanksgiving, we’d like to entertain a few soldiers at our house.”

The sergeant says, “Wonderful, we’ll send them over, and on behalf of the army, thank you for your hospitality.” She says, “It’s our pleasure. But Sergeant, one more thing: please don’t send us any Jews.” He pauses and then says, “Understood.”

Thanksgiving Day comes, the woman is setting the table and carving the turkey, and there’s a knock on her door. She opens the door, and to her utter shock, there are five African American men in uniform standing there.

She snaps, “What are you doing here?”
One of the soldiers says: “We understand that you invited us for Thanksgiving.”
She says, “This is not what I meant. What a terrible mistake.”

To which the soldier says, “No, ma’am, Sergeant Goldberg never makes mistakes.”

(adapted from Jewish Humor: What the Best Jewish Jokes Say About the Jews, by Rabbi Joseph Telushkin)

I have always loved this joke. There is so much of the mid-century American Jewish experience embedded in it. But as I was reflecting on this MLK weekend of racial awareness and action, this classic joke came to me in a new light. I used to think it was a joke about solidarity between the Jewish sergeant and the African American soldiers. Look how, together, they stuck it to that bigot!

But encoded in the joke is something else, something uncomfortable, about white Jewish privilege. Yes, the clever Jew gets the upper hand against the anti-Semite -- that’s a classic trope of Jewish jokes. But what about the hapless African American. Is this really about solidarity? Or is it manipulation? Did the sergeant put those unwitting soldiers in a potentially dangerous situation to prove a point? Try flipping the races in the joke and you’ll see -- there’s a power dynamic in play that we shouldn’t ignore: the Jew who passes as white wielding power over the African American. The joke only works because the Jew can pass as white and has a privilege the African Americans do not.

It’s hard to talk about because we like to think of ourselves as allies. We carry memories of racial solidarity past even as we turn a blind eye to racial injustice today. We love to celebrate our legacy as leaders in the civil rights movement, forgetting, by the way, how many Jews 50 years ago thought we should keep our heads down and stay out of it. We pat ourselves on the back with pictures of Rabbi Heschel marching with Rev. Dr. King, even as we let that legacy lapse. As one of my colleagues put it: “Are we just running on the fumes of Heschel?” When did prophetic zeal turn to privileged complacence? How did solidarity turn to silence and separation?

As it turns out, something like this happened to the Israelites, too. In the Torah portion this Shabbat we find ourselves, fittingly enough, right at the climax of our liberation story. The Israelites leave Egypt after the tenth plague has finally broken Pharaoh’s resolve. In the verses describing the Exodus itself, there occurs a phrase that only happens this once in the Bible.

The Israelites journeyed from Rameses to Succot, about six hundred thousand men on foot, aside from children.
V’gam erev rav alah itam… And a ‘mixed multitude’ went up with them… (Exodus 12:37 - 38)

It’s not clear from the text exactly who these folks are. The rabbinic commentators agree it was some kind of Egyptian crowd intermingled with the Israelites -- by intermarriage, perhaps, or at least by common cause. Poor, enslaved Egyptians saw an opportunity for liberation, and they took it. It has the makings of a great lesson in solidarity, even intersectionality, all the ways in which race and class and faith are used to divide and oppress. It’s a reminder too that it wasn’t just the Israelites who suffered under Pharaoh. No system of oppression ever stops at its most obvious scapegoat. It has been well documented by scholars of the Jim Crow era that racism was used as a tool not simply to keep African Americans down, but also to suppress poor white people. Make for them an enemy to blame for their struggle, so goes the perverse logic, and they’ll be too distracted to notice the privileged white folks profiting from their poverty. Of course that’s not just history either; we see this pattern in today's current events, too.

Unfortunately, our tradition was not always kind, not always enthusiastic about solidarity. Midrashic traditions and rabbinic commentators had other things in mind for the Erev Rav, that mixed multitude who joined in our liberation. In the episode of the Golden Calf, when Aaron throws the collected gold into the fire and it comes out as a molten calf, Rashi explains it like this: “Once he threw it into the furnace, the wizards among the mixed multitude (the erev rav) that had come up from Egypt with the Israelites turned it into a calf by magic.” And further -- because Aaron declares in that moment “these are your gods” and not “our gods” -- says Rashi, “We learn that it was the mixed multitude who assembled around him and made the calf, and who afterward led Israel to go astray after it” (Rashi on Exodus 32:4).

In a 2015 TedX talk at Hampshire College, Jay Smooth offers some advice for how to do this work around race. “Most Americans avoid race conversations like the plague,” he says, “and often we take our ability to avoid it, and use it as a measure of our progress and enlightenment.” Instead of grasping for the mirage of being colorblind, we should seek to identify our racial blind spots and grow past them. The problem, he explains, is that racism is not like having your tonsils taken out -- as if once they’re removed, you’re all good. This can be hard for “nice white people” to hear. In Smooth’s words: “We need to move away from the tonsils paradigm of race discourse to the dental hygiene paradigm of race discourse.”

“It’s like being a clean person,” Smooth explains. When someone tells you that you have something stuck in your teeth, you don’t get defensive and say, “But I’m a clean person!” You say thanks and you clean your teeth. He ends his talk on a similar note to the chapter offered as readings in the service tonight, about how to react when someone suggests you said or did something racist: “I hope...we can shift away from taking it as an indictment of our goodness and move towards taking it as a gesture of respect and an act of kindness when someone tells us we’ve got something racist stuck in our teeth.”

That’s why the Religious Action Center of Reform Judaism has invested in congregation based organizing. That’s why I’m here as the Texas Organizer, to support our synagogues in doing this hard work, and to help us join together across the state, across lines of difference, to elevate our impact. That’s why we’re bringing Reform Jewish leaders from all over Texas to Austin March 25-26, to learn about advocacy and to lobby on school finance reform. It’s an issue we believe has a chance of moving this session, and it’s a way for us to enter into coalition with organizational partners who care about providing quality, equitable education for all the children of Texas. And while we’re on the theme, public schools are ground zero for racial injustice, from the way we resource them to the way we tolerate the school to prison pipeline. You’ll hear more about how to get involved in those efforts soon, including all the work we need to do leading up to the advocacy day, from your rabbis and congregational leaders.

In April 1967, a year before his assassination, Dr. King gave a sermon at Riverside Church in New York. Among his searing critiques of American racism, militarism, and poverty, he said this:

Meanwhile, we in the churches and synagogues have a continuing task. We must continue to raise our voices and our lives. We must be prepared to match actions with words by seeking out every creative method of protest possible. Social change comes most meaningfully through nonviolent action.

He knew this because he knew that the civil rights movement didn’t happen on the back of a bus or on the Edmund Pettis Bridge or even at the Lincoln Memorial. The civil rights movement happened in church meetings all across the south, and in congregations of people who would not stand idly by the oppression of their neighbor. People of faith came together not just for symbolic talk but to do the grinding, persistent, strategic, transformational work of social change.

The question for us is whether our synagogues are willing to do this. Or have we internalized too deeply the “be nice” rule of the dominant culture? That’s part of what Jay Smooth meant when he said most of us avoid talking about race. It’s too hard, too uncomfortable, too agitating. We want civility, civil dialogue -- which I guess is nice, to a point. But when calls for civility are veiled ways of saying “let’s not confront difficult things”; when civil discourse is code for keeping the status quo -- then civility is a trap, not a tool. Be wary of civility. Organizers like to say, “If you want to make change, you have to break the ‘be nice’ rule.”

Unlike our clever Sergeant Goldberg, we do make mistakes. We are human, after all, a mixed multitude of imperfect, shortsighted, stiff-necked creatures. Let us also be an Erev Rav of redemption seekers, stumbling in solidarity toward whatever promised land we can reach together.