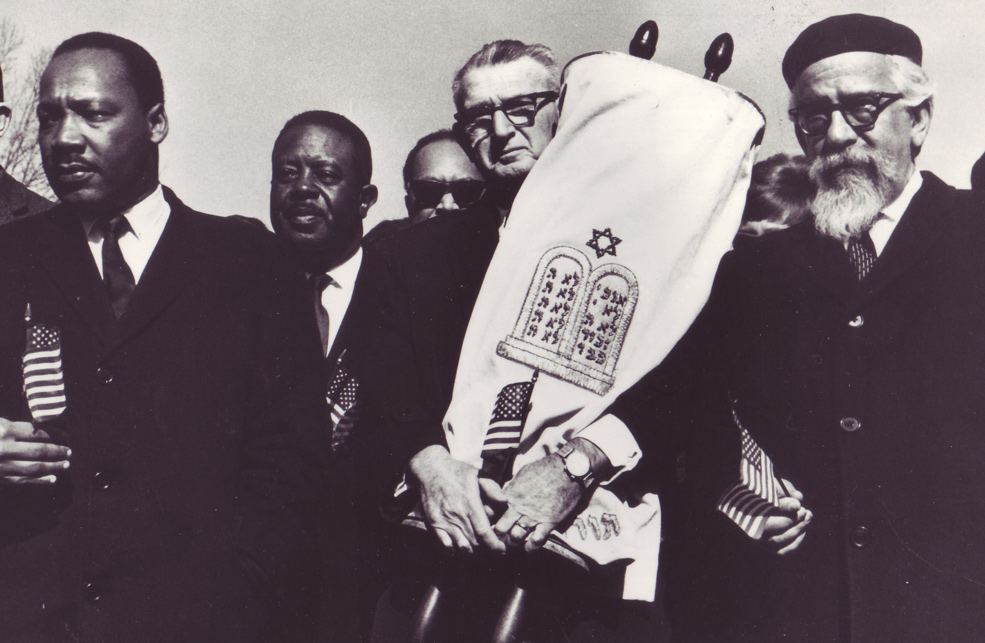 I joined America’s Journey for Justice in North Carolina during the week of Nitzavim, a portion that will be read again on the morning of Yom Kippur. It describes for us that moment when our ancestors stood at Sinai to enter into covenant with God. The text says that everyone was there - men, women and children, workers in the community and the stranger at the gate – and that the covenant was made with them and also with those who were not there that day. I found that verse particularly meaningful, feeling that I was representing all those who, for whatever reason, were unable to participate.

In my pocket, I carried with me that iconic photograph of Dr. Martin Luther King Jr., together with Rabbis Abraham Joshua Heschel, Maurice Eisendrath carrying a Torah scroll and Everett Gendler who continues to inspire us with his commitment to social justice. On the back of the photograph, I had written a quote from each of these men:

“Our lives begin to end the day we become silent about things that matter” (King);

“Some are guilty, but all are responsible” (Heschel);

“Silence in the face of…moral issues is not only acquiescence in moral horror; it is spiritual bankruptcy” (Eisendrath);

“As in life all of us were and are able to offer support to the righteous among us, so do the memories of those righteous ones, of King, of Heschel, and of Eisendrath, bless and sustain us” (Gendler).

I shared this photograph with as many of the marchers as possible because I wanted them to understand that the Jewish people have always stood arm in arm with the African American community in the fight for social justice, doing what we can to set right the wrongs of the world, which is for me the real meaning of tzedakah. Rabbi Stephen Wise and Kivie Kaplan were founders of the NAACP. It seemed appropriate, therefore, that Reform rabbis joined the march from Selma to Washington, D.C., the only clergy group of any denomination or religion to do so. It was inspiring to see our Torah lead the way.

As I walked, another story came to mind. I am proud to have been born and raised in Cleveland, Ohio, the first major city in America to elect an African-American as its mayor: Carl Stokes in 1967 (his brother Louis Stokes who died recently served fifteen terms in the US House of Representatives). A few months before the mayoral election, Dr. Martin Luther King Jr. came to Cleveland and while there, he addressed the students of Glenville High School.  Many years later, at that high school, inside a slim box of old reel-to-reel tape, hidden away in a pile of stuff about to be discarded, was uncovered a recording of that speech. As to be expected, it was powerful, poetic, and inspiring. Dr. King encouraged students to shun violence, seize opportunities and always remember that the best way to overcome anything is to be the best that you can be. I am told that the speech is now part of the curriculum in Cleveland high schools, and through the miracle of modern technology, we too can listen to it online.

Dr. King ended his remarks that day with these words: “…if you can’t fly, run. If you can’t run, walk. If you can’t walk, crawl. But by all means, keep moving.” In Dr. King’s memory, let us promise each other that we will keep moving and work together to create a just and compassionate society where all may share God’s gifts in the joy of freedom.

Rabbi Sally J. Priesand, America’s first female rabbi, was ordained on June 3, 1972, by the Hebrew Union College-Jewish Institute of Religion in Cincinnati, OH. She served as Rabbi of Monmouth Reform Temple in Tinton Falls, NJ, from 1981-2006. Upon her retirement, she became Rabbi Emerita. In her local community, she continues to serve as President of Interfaith Neighbors, an organization whose primary purpose is to provide rental assistance to the working poor.

END_OF_DOCUMENT_TOKEN_TO_BE_REPLACED

On Tuesday evening, we launched the Reform Movement's Every Voice, Every Vote campaign, our nonpartisan initiative to strengthen democracy by encouraging and protecting voter participation. As if this effort was not urgent enough already, the leaked draft Supreme Court decision in Dobbs v Jackson Women's Health Organization made clear that every issue of importance to our Movement is on the ballot this year, including abortion rights.
Women's Rights
Image