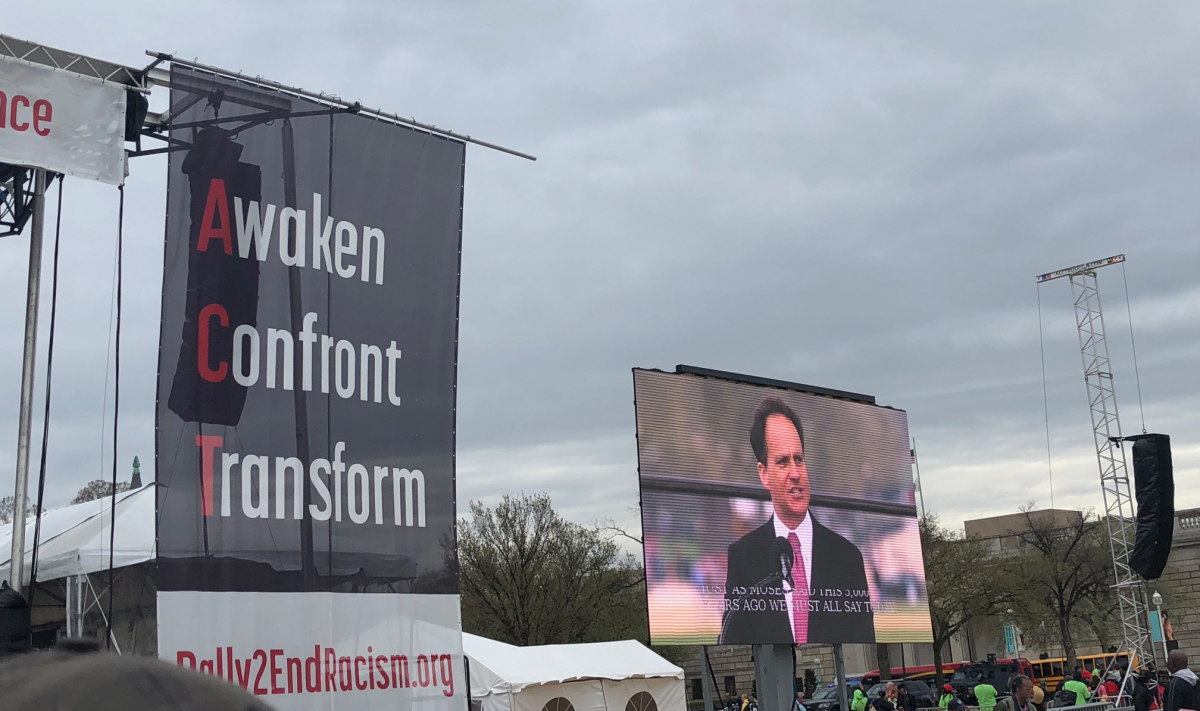 This morning, Rabbi Jonah Dov Pesner, Director of the Religious Action Center of Reform Judaism, adressed the crowds at the Rally to End Racism in Washington, D.C. More information on the event can be found at www.rally2endracism.org.

Good morning. I am Rabbi Jonah Dov Pesner, Director of the Religious Action Center of Reform Judaism – the largest and most diverse Jewish Movement in North America.  From our historic building just a couple of miles from this National Mall, we organize and mobilize 2 million Reform Jewish souls, led by 2,000 rabbis, in nearly 900 Reform congregations across North America.

We take great pride in the fact that for its entire six-decade existence, the Religious Action Center has been working to confront racial injustice on behalf of the American Jewish community.  For decades our headquarters was also home to the Leadership Conference on Civil and Human Rights, the largest umbrella civil rights organization in our nation. It is where parts of the Civil Rights Act of 1964 and Voting Rights Act of 1965 were drafted and where strategies to pass scores of civil rights laws were forged. And it is especially meaningful to us on this day, that  Dr. King, whose memory we honor, would often work at our offices when he was in town.

Dr. King preached that “we are now faced with the fact that tomorrow is today. We are confronted with the fierce urgency of now…there is such a thing as being too late.”

For Stephon Clark, we are already too late.

For Eric Garner, Tamir Rice, Sandra Bland, and far too many other people of color killed by law enforcement, it is too late.

But it is not too late for us to act to stop this cycle of injustice, to dismantle the structures of inequality and oppression that undercut our nation’s commitment to justice and equality for all.

For the young people of color caught up in the school-to-prison pipeline, we cannot be too late.

For all those facing voter suppression, we cannot be too late.

And hearing King’s warning today, of all days, during the holiday of Passover, is especially stirring. The story of the Exodus retold during Passover was a constant source of inspiration to Dr. King. Our liberation from Egypt was set in motion when God heard our ancestors cry out from their bondage. God appeared to Moses from the burning bush and Moses responded:

Hineni. Here I am.

As leaders of religious communities, bearing witness to injustice, God calls to each of us, demanding a response. To say “Hineni” is to pledge to meet the challenge.

So say that with me now: Hineni!

But within each of our communities, we have not always been united in our call for the liberation of all people. We need to be honest about how systemic racism not only pervades our society, but also how some of us have, at times, been too reluctant to examine our own denominations, our own white privilege, or to do all we can to tear down systems of oppression.

As Dr. King said in his final speech 50 years ago just yesterday:

“Whenever Pharaoh wanted to prolong the period of slavery in Egypt he had a favorite, favorite formula for doing it.  What was that?  He kept the slaves fighting among themselves… When the slaves get together that’s the beginning of getting out of slavery. Now let us maintain unity.”

Here we are today, united and together, precisely because we will not allow the opponents of social justice to divide us. We will not be divided by the perpetrators of white supremacy and homophobia and Islamophobia and anti-Semitism.

In 1964, Dr. King called on his friends in our national rabbinic association to urgently come down to St. Augustine, Florida to join the campaign against segregation. Seventeen Reform Jewish leaders immediately left a rabbinic convention in New Jersey to travel south. When they arrived in St. Augustine, they joined Black activists at segregated restaurants and, together, jumped into the swimming pool of a segregated motor lodge. The motel manager dumped acid into the pool to get them out. The police used a cattle prod on a young woman.

Well, we know that sometimes we need to cause, as Congressman John Lewis says, “good trouble.”

We will not rest until all of us are free.

We join together and say, in the plural of Moses’ response:

And we have so much work to do.

Together, we will honor Dr. King’s legacy and be the movement that finally dismantles white supremacy and overcomes the systemic racism

that still plagues our country.

Hineinu! Here we are, striving to overcome mass incarceration.

Hineinu! Demanding that all citizens of age have access to the ballot.

Hineinu! Mobilizing so that all children can attend school without fear of gun violence.

Hineinu! United and together, we will confront anti-Semitism, racism, and all forms of bigotry.

We are here today because Dr. King’s prophetic vision remains unrealized. All of us, together, are entrusted with making good trouble.

And continuing the work; Ennobled by the knowledge that the light entrusted to us is the light of God’s justice and freedom; Renewed in our abiding commitment that, no matter the challenges ahead, our work will not be complete until the fetters of wickedness are broken, the oppressed go free, and justice rolls down like waters and righteousness like a mighty stream. Until then, our work will not be complete.

But in the meantime, we refuse to be too late.