Coming Together as a Movement Through Social Justice

December 15, 2014
By Reuben Bank When people ask me why I’m passionate about social justice I always struggle to find the correct answer. There are several generic responses that I could go to such as, “because there are so many unjust things in the world,” or another classic, “because I have a passion for helping people,” but these never seem to work for me. They don’t encompass the real reasons that I am passionate about tikkun olam, about repairing the world. I’m not passionate about social justice by itself, I’m not interested in doing random community service hours every weekend. As a Reform Jewish teenager, I am passionate about being a part of a movement. A movement is the act of moving your body. According to this definition, a movement does not include moving a singular part of your body; you don’t just move your legs or arms alone, you must move your entire body all at once for the movement to be a success.  Too often, in regards to teens, we only move our left foot. Our left foot represents NFTY, the North American Federation of Temple Youth, which involves Reform Jewish high schoolers in Jewish life. Although it is vital for NFTYites to understand in order for Jewish life to continue, I believe a large and growing number of teens don’t know that the rest of the body exists. When I was in 10th Grade, I attended the RAC’s L’Taken Social Justice Seminar with my confirmation class. Going into the event, I didn’t know what to expect; I was passionate about learning all of the facts of social issues, but before this program I had never truly taken action. I was inspired by the briefings given by the RAC’s Legislative Assistants, and truly changed after I was able to lobby in Congresswoman Karen Bass’ Office about the Employment Non-Discrimination Act. Since then, I have had the amazing opportunity of attending the past two Commission on Social Action meetings, first as a part of the Congregational Engagement Seminar, and then as one of three NFTY delegates. As a teenager walking into CSA meetings, it is extremely inspiring to see the work that is being done in our Movement. Hearing expert speakers explain controversial and pressing issues has inspired me more than anything has inspired me before. During the last CSA meeting, the director of the Georgia NAACP, Rev. Dr. Francys Johnson, spoke about racism in America today. In the month before this meeting, my history class had been discussing different ways that racism manifests itself in modern day America. Being able to see that the Reform Movement cared so deeply about this issue as well was extremely empowering to me, and made me feel even more proud to be a Reform Jew. Because of my experiences with the RAC, I have been motivated to take what I have learned and bring it back to my community. I have been able to write and lead programs at NFTY SoCal (NFTY Southern California) events about what the RAC does and how teens are able to get involved and truly make change. As a senior in high school, who has been affected so positively by events such as L’Taken and CSA meetings, it excites me to be able to ignite the fire of social justice in underclassmen who I hope will soon join me in motivating their peers to change the world. To me, being part of a movement means being a part of a people with a rich history of joining together and changing the world. When I go to a RAC event and see some of the most powerful rabbis and lay leaders of the Reform Movement sitting in a room together, I feel empowered. These experiences remind me of why I am passionate about social justice. I am passionate about social justice because I have a moral obligation as a Reform Jew in this Movement to carry on the amazing tradition that we have of tikkun olam, repairing the world. So I end with a question, in regards to teens: will we continue to focus only on strengthening our left foot, or we will begin to connect our actions to the rest of the body? Reuben Bank is senior in high school in Los Angeles, CA and a member of University Synagogue in Brentwood, CA. He is the Co-President of University Synagogues youth group, UNITY, as well as the Head Songleader for NFTY Southern California.

L'Taken is a transformational, innovative, and fun four-day program in Washington, D.C. that teaches high school students about the intersection of Jewish values and public policy. The program also trains them in leadership skills.
Jewish Values
Image 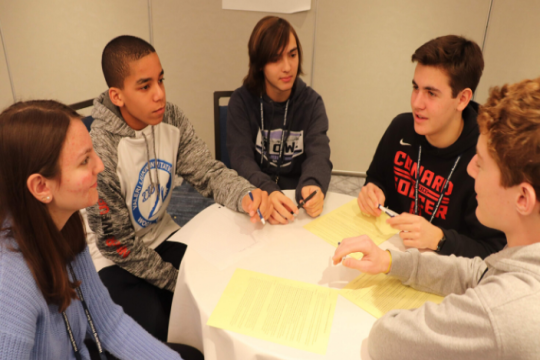