A version of these remarks was delivered by Rabbi Jen Gubitz on May 1, 2015 at Temple Shir Tikva in Wayland, MA.

It was an image out of a utopian movie. Children seated in organized rows. Some dressed in traditional African garments. A vast array of what you could see: skin tones, hair color, height - and, of course, a vast array of what you could not see: religion, ability, disability, personality, and socio economics.  Children all singing together: “Jambo, Jambo, Jambo, sana, jambo. Jambo, jambo, jambo watato, jambo.” This was a 1974 song by Ella Jenkins using basic Swahili that meant: “Hello, hello, hello, everybody, hello” sung as part of the yearly celebration focused each year on a different part of the world - this time Africa.

The year before that we dressed in red, white and green and did traditional dances from Mexico. And the year after that, wandering through the halls in kimonos, we practiced the sacred art of a Japanese tea ceremony and the origami folding of a 1000 Cranes.

It was a public school created after the Civil Rights era as a means to bridge racial, ethnic and socio-economic gaps through Fine and Performing Arts and Multicultural exploration.  It was exceptional and it was well before Crayola came out with its box of Multicultural (a.k.a. skin tone colored) crayons. Some children came from the neighborhood where the school was located, of which some were white, hispanic or asian, but many were black. I was actually bussed in, as were many of the other white children from neighborhoods as far as 30 minutes away. It was a reverse commute from what we understand bussing to be today. While I was and sometimes felt in the minority as a Jew, I did not know that I was, nonetheless, actually in the majority because I was white. In fact, while I knew I had white skin, I had no idea what it really meant to be White with a capital W.  Until perhaps 7th or 8th grade while watching the results of the OJ Simpson trial at school during Show Choir.  The Show Choir was the most diverse group in the school - and I could feel the sharpness of divided reactions emerge among kids who had grown up together singing in swahili, playing our orff instruments, and raising our voices with utopian choral music that praised the rainbow of American society.  That’s when I learned I was White with a capital W.

And so today, I share with you the sadness of extremes that exists in the hyphen of our Torah reading calendar. Achrei Mot hyphen Kedoshim. This week is a double portion.  Achrei Mot (After Death) hyphen (-) Kedoshim (Holiness.)

Achrei Mot, after death. Freddie Gray’s death by police brutality, officially deemed murder and homicide by Baltimore’s Chief Prosecutor.  A brutal and senseless loss like so many others.

Kedoshim, holiness.  As Baltimore residents take to the streets, “Not on our watch,” they say.

Kedoshim, holiness. As clergy from around the country, such as members of T’ruah - Rabbis for Human Rights - flew to St. Louis to join hands with an interfaith community marching in the streets of Ferguson and this week also in Baltimore.

Kedoshim, holiness. As people called in orders of pizza to feed protesters.

Kedoshim, safe houses for teens to come to to talk about the issues under one roof;

Kedoshim, blacks and whites cleaning up together after riots.

Kedoshim, holiness. As Baltimore convulsed in protests-turned-to-riots, “Not like this,” said Freddie Gray’s mom. “I want justice for his death but not like this. Don’t tear up the whole city.”

Somehow Achrei Mot, even after Freddie’s tragic death, his mother has found her way beyond the hyphen to Kedoshim.
Achrei Mot hyphen Kedoshim.

After these deaths, I find myself primarily still in the hyphen for I did not suffer a loss and I did not protest. Of all the kids with whom I grew up, I have one black friend. I have barely any friends who are not Jewish and mostly friends who are rabbis, which is about as homogenous as one can get. I’ve become one of those people who at times will lock the door when I see a man of color approaching late at night.  I could justify that away with our increasing need for caution these days, but I also know the assumptions in my head that are inherently racist.  When I encounter a black person well dressed in a suit and tie or heels, and when I encounter a black person wearing a hoodie. More often than not - I am in the hyphen.

In my family, there are two career paths: serving the Jewish people, which my parents and I love and serving low income, predominantly African American children in public education settings. My sister teaches minutes away from Ferguson. My brother and his wife are building in New Orleans a school modeled on the very school in which we grew up. I’ve always sought a way to merge their work with mine. I’ve chosen this active use of myself tonight, not because I hope you will assuage me of any guilt nor to guilt you; nor do I need reinforcement that, of course, I also reside in the work of Kedusha. I know that. Rather, I use myself, my faults, my internalized racism - as a model and as a call to action for myself and for us all.

Where are you in the hyphen? Though we share not the same precise streets as Ferguson or Baltimore, would you run into the streets if we did? Well guess what? We actually do. We have those same streets. It cannot go ignored or unsaid just how highly segregated Boston truly is and just how possible those events of Baltimore or Ferguson could easily take place here.

Where are you in the hyphen? In what ways do you have thoughts, fears, and opinions that are known as internalized racism? I ask not because I think you if you do these things you are inherently a horrible person but because we all have them within us and we rarely admit it. But how often do you cross the street or lock those doors? Do you refer to a neighborhood as shady - when what you really mean is that black people live there? Do you celebrate gentrification because it means better restaurants and hipper coffee shops? (I’m guilty of that.) Have you ever used language like “the hood”, “that’s ghetto”, “those thugs”? Yes, the Jewish community suffers our problems in how others believe false truths about us, but do we realize how lucky we are not to be suspected of shoplifting, racially profiled, and never in danger when wearing a hooded sweatshirt in the chilled night air?
This past week at the Religious Action Center’s Consultation on Conscience - I was inspired by Rabbi Susan Talve, a social justice giant in downtown St. Louis, and Aaron Jenkins, the Executive Director of Operation Understanding DC, an organization that brings together black teens and Jewish teens for a year long process of discomfort and exploration of racism and anti-Semitism. They pushed us to consider our assumptions, our internalized racism, and what we can do about it. We do not yet have this particular organization in Boston -  but there is capacity and I think urgency. On Monday, I’m speaking with Operation Understanding’s Founder and St. Louis Jewish community leader, Karen Kalish, to see in what ways our community might push this forward. This project would be for me, both personally and professionally, a way to move beyond the hyphen.

The order of our parshiyot, our Torah portions, is Achrei Mot Hyphen Kedoshim Emor. After Death, hyphen, there is Holiness. And then - Emor - Speak.

Check out Jews United for Racial and Economic Justice. Watch the video “Talk about the Talk.” Educate yourself on the issues.

Emor, speak up so as not to further normalize language and behaviors that are clearly not working for our world - and that elongate indefinitely that hyphen that separates us from them. It is a hyphen that continually reinforces the black community’s unequal status in America.

Rabbi Talve entreats us: "find YOUR Ferguson, find that sleepy suburb that is ready to erupt, and jump in together to save all our children."

And may we journey together from Achrei Mot hyphen to Kedoshim to Emor - from senseless deaths to communal equality and holiness and to speaking out for justice.

Rabbi Jennifer Gubitz is the Assistant Rabbi at Shir Tikva in Wayland, MA, and a former Eisendrath Legislative Assistant. 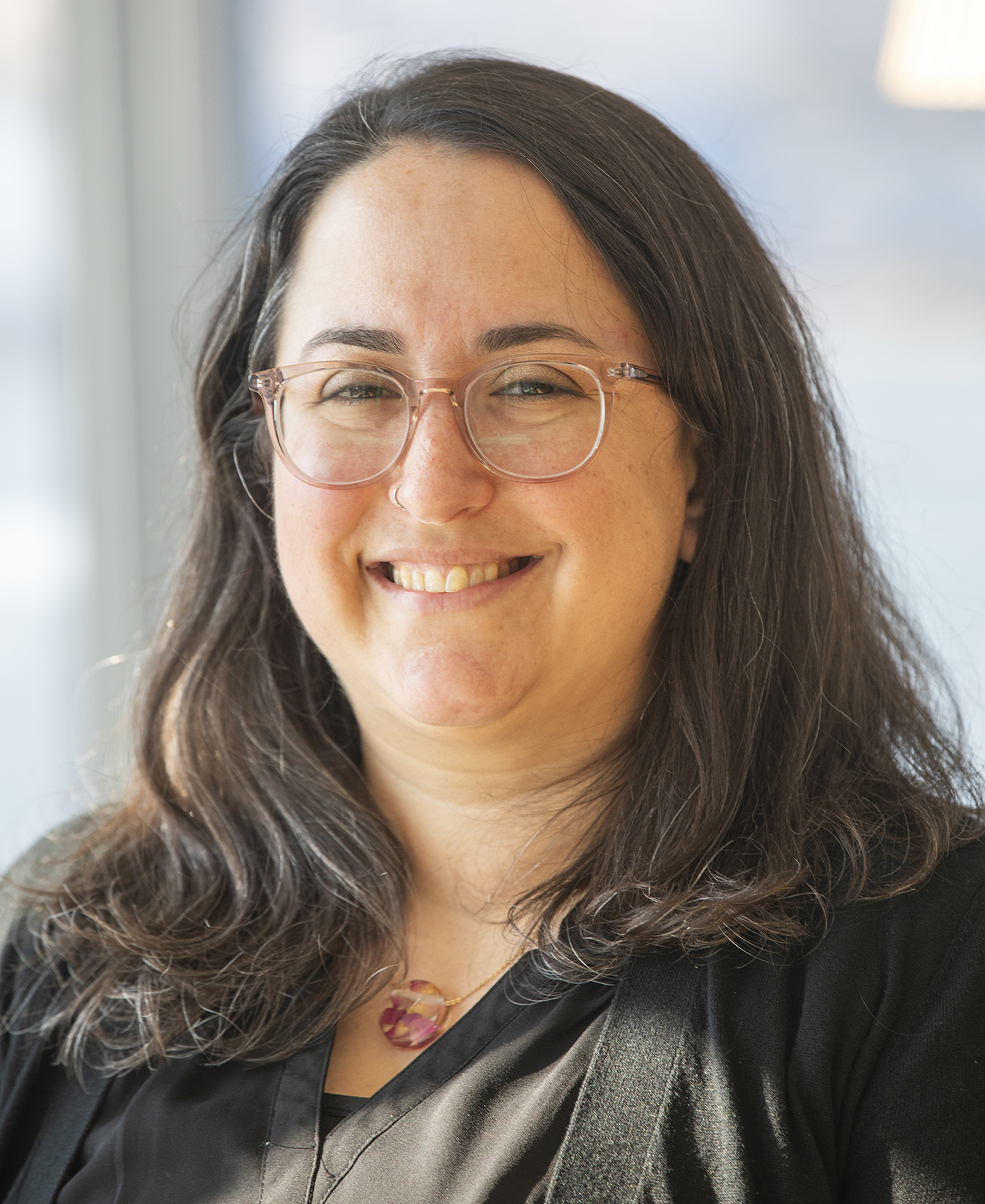 Rabbi Jen Gubitz (she/her) serves as Director of Jewish Engagement at Temple Shalom of Newton and is the founder of Modern JewISH Couples. She is the co-host of the OMfG Podcast: Jewish Wisdom for Unprecedented Times and recently completed an intensive certificate in Family Therapy through Therapy Training Boston.   She is a proud product of Indiana University's Borns Jewish Studies Program and URJ Goldman Union Camp (GUCI), a Reform Jewish summer camp in Zionsville, IN. Her writing appears in the Boston Globe, Romper, and Lilith Magazine. Visit her website to learn more.