RAC-NY's work was made possible with generous seed funding from the Michael & Alice Kuhn Foundation.

RAC-NY launches Climate Covenant: A RAC-NY Campaign to Combat Climate Change. The time has passed that individual action – recycling, composting – is enough. We must come together as Reform Jews and join with others across lines of race, faith, and class in joint action to end our dependence on fossil fuels and stop climate change. The stakes are high, and the potential benefit for all of us is great. Read more about the two- to three- year Climate Covenant campaign.

Read a one-page fact sheet about the RAC-NY-supported bills to decrease natural gas use in buildings.

Send a message to your state elected officials.

Join leaders from Reform congregations around the state for a virtual meeting on October 12th, at 7:30-8:30 PM, to learn about a proposal on the November ballot and work to fulfill our RAC-NY Climate Covenant.

New York's first public referendum on an environmental bond proposal in more than 25 years will appear on the ballot in November. We need your help to build support! During the festival of Sukkot, we give thanks for the earth's bounty. This is a particularly appropriate time to acknowledge that we cannot take the earth and its gifts for granted, and to take action.

Register here and join us during Sukkot to reaffirm our mutual commitment to protect our world for future generations. We will be joined by Jessica Ottney Mahar New York Policy and Strategy Director at The Nature Conservancy. We'll give you the tools you'll need to educate your synagogue's clergy and congregants, your neighbors and friends, to vote YES this Fall on the Clean Water, Clean Air, and Green Jobs Bond Act. We can't do it without you!

On Election Day, we have a special opportunity in New York State to vote YES on an Environmental Bond Act that will allow New York to help ensure Clean Water, Clean Air and Green Jobs for years to come. 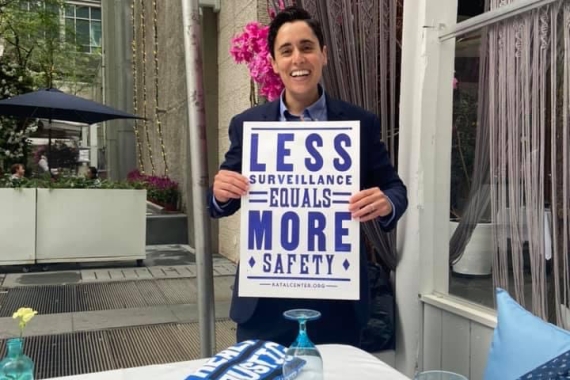 As 2021 comes to an end, we want to take an opportunity to reflect on our 2021 successes as we plan for new ways in which we will work for a better and more just New York in the years ahead.

2021 was a good year for RAC-NY, with more Reform congregations and more Reform Jews joining together to make a real difference in the lives of New Yorkers. The efforts of RAC-NY were key to the passage of Less Is More parole reform was recently signed into law. Under the bill, thousands of people who finished their prison sentence will no longer be sent back to jail for minor parole violations like missing an appointment with a parole officer or breaking curfew. RAC-NY contributed to a coalition effort by meeting with 57 legislators across the state, winning the support of key legislators in Westchester, Long Island, and elsewhere where the rest of the coalition lacked access 835 Reform Jews from 65 Reform congregations throughout the State participated in the Less Is More campaign and in doing so, helped make New York State safer, more humane, and more racially just.

RAC-NY also participated with Reform Jews across the country in the Reform Movement Racial Justice Campaign. Reform Jews across the state participated in trainings on Racial Equity, Diversity and Inclusion (REDI). We also participated in actions to help pass two key Federal voting rights bills, including a November Call-In day to President Biden and NY Senators and a powerful zoom meeting with Senate Majority Leader Chuck Shumer. Schumer was visibly moved by the 675 Reform Jews who joined the meeting, saying "The fact that you were here, the fact that you have my back, the fact that you are pushing so hard on something I so devoutly believe in, gives me strength." While the two voting rights bills have not yet passed the Senate, we will continue to hold Senator Schumer accountable for the promises he made to us that he would make sure that the filibuster will be reformed and the bills will pass.

All told, 1, 731 Reform clergy, lay adults and teens from 91 Reform congregations participated in RAC-NY actions and trainings this year.

In 2020, RAC-NY helped pass “The Protect Our Courts Act," which bars Federal deportation authorities from arresting anyone going to, attending, or leaving court without a valid warrant. This act is helping stem a 1,700 percent increase in these arrests since 2016. This act strengthens our continued connection to our undocumented neighbors and to immigrant justice groups, and it helps our state and local courts function free from interference from Federal deportation authorities.

In 2019, RAC-NY helped pass “The Green Light Act” which makes driver’s licenses available to all New Yorkers, including our undocumented neighbors. This act makes our roads safer by making sure more drivers are licensed, trained and insured. Decent people no longer have to choose between catching two buses to work risking losing their job for being late or driving and risking being deported. They no longer have to choose between scrambling to find a ride to take their child to the hospital risking their child’s health or driving and risking being deported. The Green Light Act makes it possible for undocumented New Yorkers to get driver’s licenses and return a bit of dignity to their lives.

In its short two years of existence, RAC-NY has involved hundreds of Reform Jews from 50 Reform congregations and communities in these successful legislative efforts.

Contact Lee Winkelman to learn more and get involved.

You can support this critical organizing work in New York State online or by contacting Kenneth Cohen.

Learn more about the RAC's key issues and get involved by signing up for RAC-NY email updates.