FOR IMMEDIATE RELEASE
May 7, 2018
Remarks by Rabbi Jonah Dov Pesner at the Faith in Public Life Press Conference to Defend SNAP
On Monday, May 7, Rabbi Jonah Dov Pesner represented the Reform Jewish Movement at the Faith in Public Life press conference to urge Congress to reject proposed cuts to the Supplemental Nutrition Assistance Program (SNAP) in the Farm Bill that would reduce or eliminate food assistance for two million Americans, including low-income working families, children, seniors, veterans and people with disabilities. The House is expected to vote in this legislation in the next two weeks. Video of the entire press conference, including Rabbi Pesner's remarks, can be viewed on Facebook. 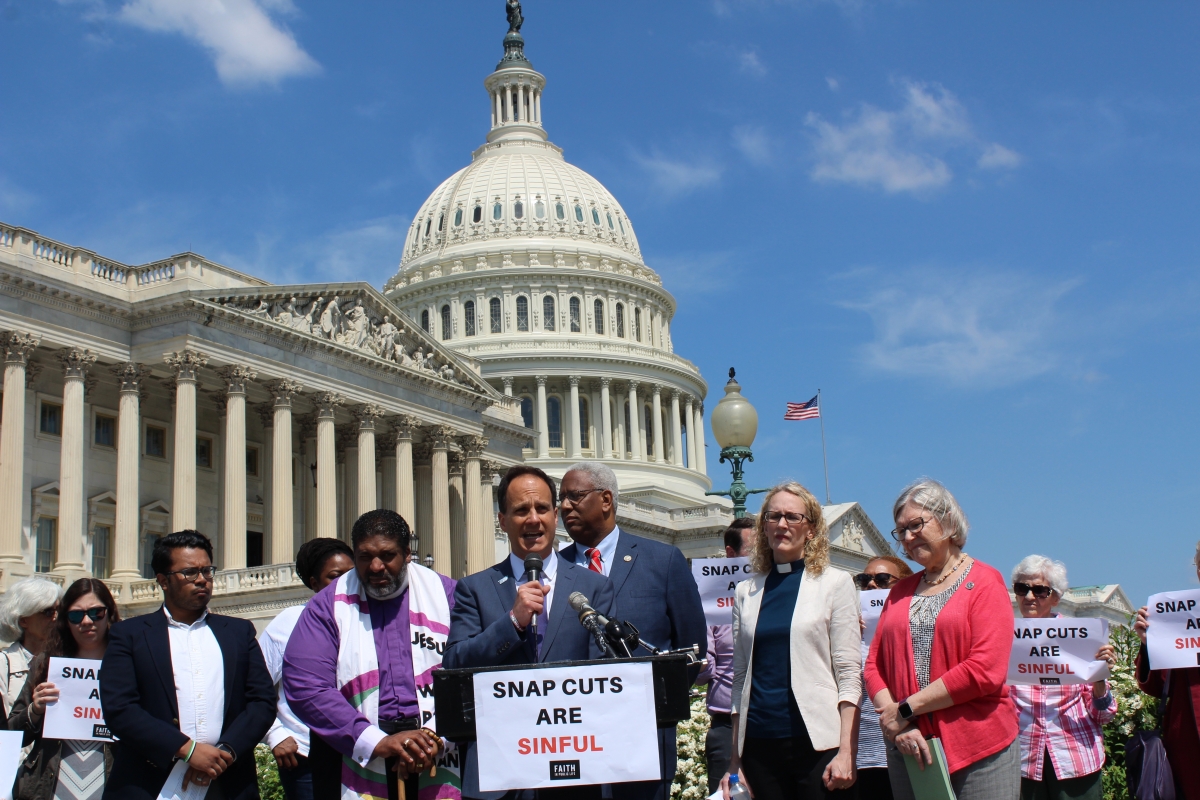 As prepared for delivery:

This is truly a day that God has given us; Let us rejoice and give praise!

And yet, despite the beauty of this sun drenched day, with God's abundance evident all around us, the voices of the millions of God's children call out to us, pleading in their hunger, asking if America, a land of plenty, has a place for us.

Though the obstacles we face are many, together, united as a multi-faith movement for justice, we know that we will head their call.

My name is Rabbi Jonah Pesner. I am the Director of the Religious Action Center of Reform Judaism. We organize and mobilize the two million souls, 2,000 rabbis, and 900 congregations that make up our Reform Movement – the largest and most diverse Jewish Movement in North America.

It is an honor to be here this morning, alongside Congressman McEachin, and my dear friends Reverend Butler, Afif Rahman, Sister Simone, and Rev. Dr. William Barber.

We gather here now, at the US Capitol, representing many others, including the over 500 people who have signed a letter calling on Speaker Ryan to respect the 40 million Americans who rely on SNAP to have enough to eat, and the millions of Americans, from all faith traditions, who refuse to turn their backs on our neighbors in need.

Last month, during our Passover seders, the annual ritual in which we remember that we were slaves in Egypt and are therefore commanded to have empathy, to love the stranger; We Jews declared: ‘Let all who are hungry come and eat.’

And yet, in the world's most powerful and prosperous nation, over 40 million Americans are at risk of going to sleep hungry tonight. Thirteen million American children live in households that do not always have enough to eat. One in five American kids will face food insecurity this year.

This is a sin.

The House Farm Bill and the assault on the SNAP program will do grave harm to those most in need. In our nation of plenty, no child should go to school hungry. No family should face a choice between paying for groceries or making the rent. And Congress should not take these cruel steps to punish the poorest Americans.

Because we hear the words of the Prophet Isaiah, and the call:

To unlock the fetters of wickedness and let the oppressed go free,

And take the poor into your home.

Then shall your light burst through like the dawn!

We must protect SNAP and reject the unjust House Farm Bill.

All people deserve dignity, and no American should face the fear of going without food. Together, we will overcome. We will love our neighbors as we love ourselves; We will love the stranger as we were slaves in Egypt; We will shine the light of justice and in our nation of plenty, and we will make sure that all who are hungry, can come and eat.