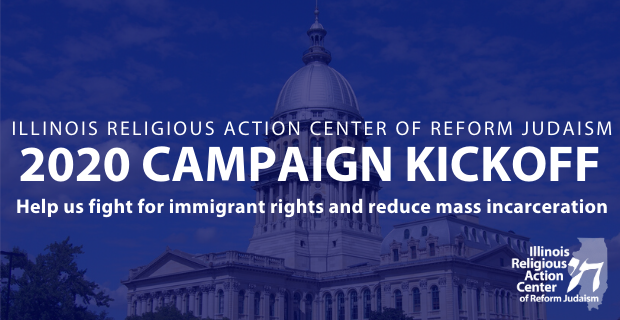 The Illinois Religious Action Center of Reform Judaism (RAC-IL) is locally-led and collectively organizing the Reform Jewish Movement state-wide to build a more just and compassionate Land of Lincoln for all. RAC-IL represents 25 Reform synagogues and 50,000 Reform Jews across Illinois. In 2020, RAC-IL will be working on immigrant justice, and criminal justice reform. These campaigns are focused on one piece of legislation, in the case of the immigration justice campaign, and one goal in the case of criminal justice reform.

Illinois Way Forward Act (SB 3774/HB 394)
Families throughout Illinois are under threat of separation due to harmful, and often lawless, immigration enforcement. Currently, federal immigration agents ruthlessly arrest immigrants, often with the assistance of law enforcement, leaving many families afraid to seek medical attention, take children to school, attend court hearings, seek police protection, or access public services without being arrested. Despite many protective policies in place, further legislation is necessary to ensure that immigrant families can safely interact with law enforcement without fear of arrest or deportation.
The Illinois Way Forward Act would:

Campaign to End Money Bond
The criminal justice system in Illinois is anything but just, resulting in mass incarceration which disproportionately impacts communities of color. The injustice begins in the money bail system, as money bond creates a system in which wealth, rather than public safety, determines whether someone remains in jail prior to their trial. The money bond system allows poverty to drive incarceration and may force innocent people to remain in jail simply because they cannot afford bail.
As part of the Coalition to End Money Bond, RAC-IL is advocating for several reforms to the money bail system which will dramatically reduce the number of people incarcerated pretrial and save Illinois millions of dollars. The Coalition to End Money Bond is asking legislators to:
Learn more about RAC-IL

You can support this critical organizing work in Illinois online or by contacting Ilene Ausubel.

RAC-IL's work was made possible with generous seed funding from the Michael & Alice Kuhn Foundation.