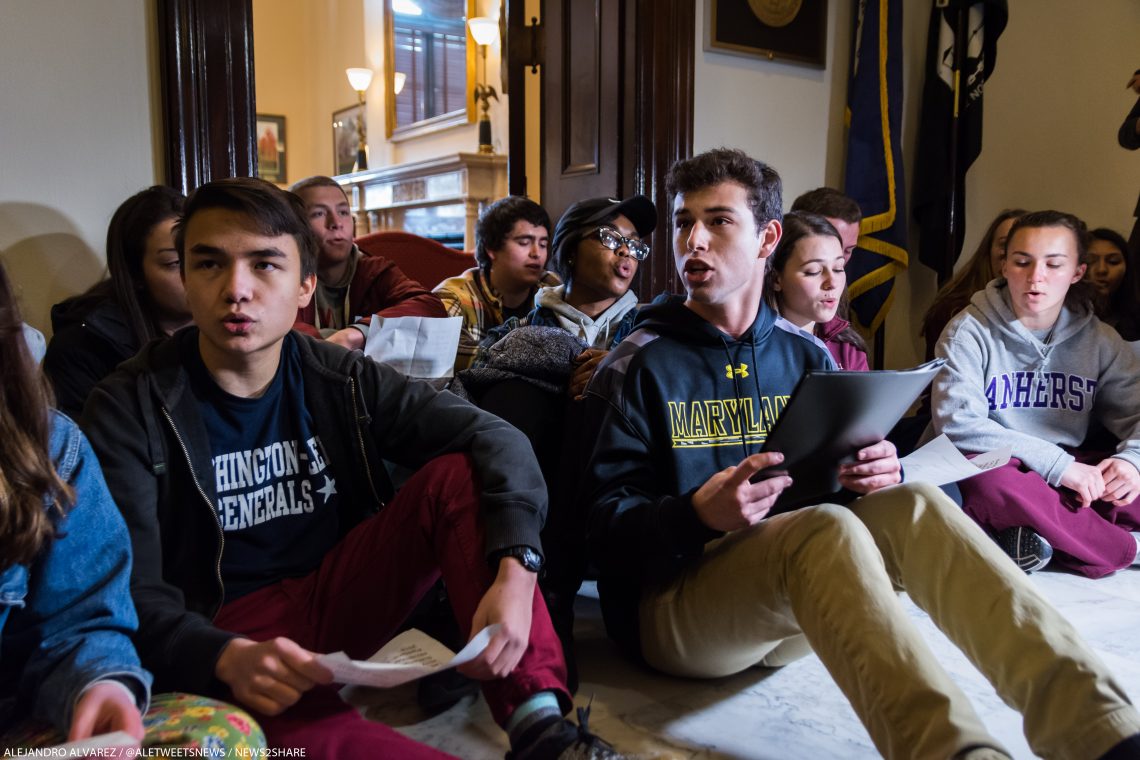 On February 14th, our country suffered another unspeakable tragedy – 17 students and teachers from Marjory Stoneman Douglas High School were killed in a mass shooting. Soon after the shooting in Parkland, I wanted to do something to stop the cycle of gun violence. I was not going to watch Congress wait for the outcry for reform to fade, just like they have after every other mass shooting. I thought that a sit-in, a tactic that has proven to be successful in some of the most influential movements in our country’s history, would make the most impact. For about two weeks, I planned the logistics and spread the word of the protest.

Then in the afternoon of March 7th, over 20 students from around the DC area walked into the Russell Senate Office Building and sat outside of Senator Mitch McConnell’s office. After around fifteen minutes of chanting and making our presence and message known, eight students were arrested, including myself. We proved our passion and determination to pass common sense gun reform, and our message was spread widely across the country. The sit-in was covered by CNN, Rachel Maddow Show, AP, Fox News, USA Today, and more media outlets. The protest was more successful than I ever would have thought it could be.

I was proud to be with other students standing up for our safety and our lives, just as many others have in the past six weeks. I was even prouder to be standing alongside thousands of students this weekend at the March for our Lives. Just as we did during the sit-in, at the March, we said “Enough is Enough”. No longer will we accept the inaction of our representatives in Congress as the norm.

As I marched this weekend along with other Jews and students from across the country, I was reminded of the Jewish values that encourage us to take action on issues like gun violence. There is too much bloodshed in America, too much senseless violence when there are concrete solutions to the problem. As Reform Jews, we are reminded to not stand idly by the blood of our neighbor, and since the Parkland shooting, we have taken those words to heart. We know that if nothing changes, these tragedies, along with the constant gun violence that occurs every day, will continue. So, we have taken to the halls of Congress, we have marched in the streets of Washington, and we are making our voice heard across the United States to demand common sense gun reform.

The part that is so amazing about this movement is the leadership roles that teens and students have taken on. Whether it was the protest I organized, the March for our Lives, or many other actions that have occurred, it all started with an idea from a few students. That idea sprouted into a plan of action and eventually a significant statement that students will not stop until we are satisfied with our government’s actions. All of this has proven that anyone can make a difference in this fight. All it takes is an idea and the determination to bring it to life. If even more students do just that, then there is an excellent chance that Congress will change its ways and pass meaningful reform that has the potential to save thousands and thousands of lives.

Alex Dubinsky is a student at the University of Maryland. Originally from St. Louis, Missouri, he is a member of United Hebrew Congregation and is the former NFTY-Missouri Valley Social Action Vice President.