What the RAC has Accomplished in 5779 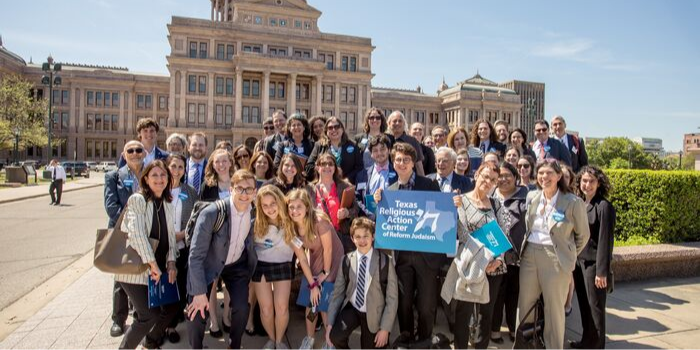 At the Religious Action Center of Reform Judaism, equality and justice are core to everything we do. Nowhere is this truer than our U.S.-based state projects, where local congregations have come together to achieve substantial victories over the past year. From joining forces with interfaith partners to help shut down Homestead immigrant child detention center in Florida, to helping pass the “Driver’s Licenses for All” bill through the successful Green Light New York Coalition, our work — with your support — has helped many communities gain a stronger sense of security in the United States. As we look forward to what lays ahead in 5780, let us also reflect and celebrate on the victories of 5779.

The California Religious Action Center of Reform Judaism (RAC-CA) helped pass two significant pieces of healthcare legislation and secured $1.3 billion to improve access to clean drinking water over the next 10 years, through the Safe and Affordable Drinking Water Fund. Engaging in social justice work is paramount for many congregations and clergy in California, which is why over 900 Reform clergy and lay leaders participated in a gun violence prevention call-in to Governor Newsom. The calls aided in securing $27 million for local gun violence prevention programs—triple the funding from last year. The power of Reform congregations coming together was also seen at the largest-ever RAC-CA Lobby Day, where more than 200 Reform Jews came together to support affordable housing and to protect tenants’ rights.

In New York, the power of Reform congregations working together was one of the reasons the “Driver’s Licenses for All” bill was passed. As a result, individuals without a social security number will now be able to apply for a driver’s license, regardless of their immigration status. This will make our streets safer and our treatment of undocumented people more just. We worked with Reform congregations across the state to join immigrant justice groups to get the bill to Gov. Andrew Cuomo. NFTY teens also pushed legislators to support the bill by focusing much of their Albany Advocacy Day on this legislation.

The Illinois Religious Action Center (RAC-IL) partnered with the Campaign for a Welcoming Illinois to pass two bills: the RISE Act and the Keeping Immigrant Families Together Act. The RISE Act helps African American students who have lost state aid due to current limits on MAP grants, undocumented students who are ineligible for financial aid, and transgender students who have been disqualified for federal aid for not registering for selective service due to restrictive definitions of gender at the federal level by giving them access to financial and institutional aid. The Keeping Immigrant Families Together Act places limits on cooperation between Illinois police officers and jails, and federal immigration enforcement. The bill will increase trust between immigrant communities and local law enforcement.

Every victory from our states reinforces how our work moves us ever closer to creating a just and compassionate world. In addition to our states, the RAC moved the Reform Movement forward on the national level, particularly through the largest-ever Consultation on Conscience and the launch of the rearticulated Brit Olam.

Reform Jewish communities do great work when they come together and inspire each other—this is one of the reasons the Brit Olam has been successful in bringing communities together. It’s also why the 2019 Consultation on Conscience was so powerful. With over 1,200 participants, the conference brought together Reform Jews from across North America to learn about, and mobilize around, immigration and criminal justice reform. Participants were joined by influential speakers like Speaker of the House Nancy Pelosi, Rep. Pramila Jayapal (WA-07), Sen. Chris Coons (DE), and activist Desmond Meade, recently named one of the Time Magazine 100 Most Influential People.

Reflecting on 5779, and looking forward to 5780, we still have much to accomplish. One way the RAC will continue to support the social justice work of the Reform Movement is through a social justice intensive at the URJ Biennial in December. Participants will learn mobilization and organizing strategies to bring their congregation or Reform community together around urgent issues. You can register for Biennial here.

Despite the different locations and policy areas our victories have come in, one thing is apparent across our wins during the past year: when we work together, a more just and compassionate world is possible.