US and Canadian Synagogues Partner to Help Refugees 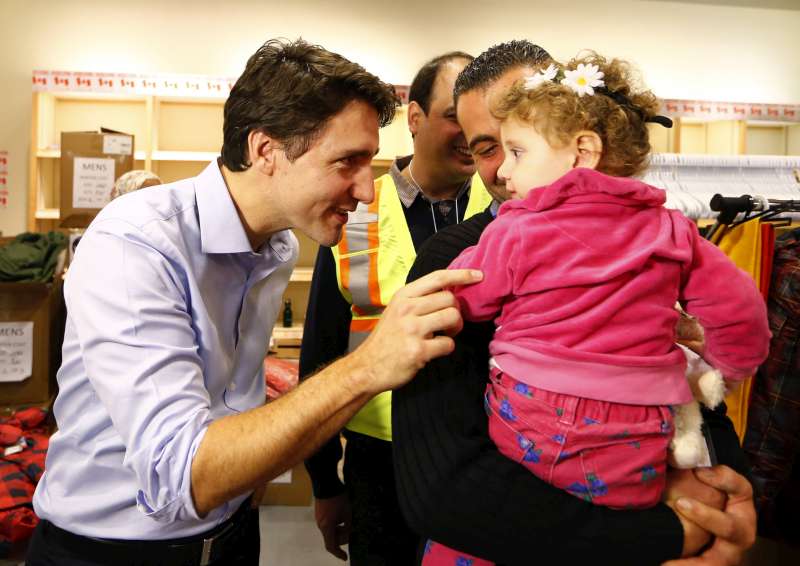 Imagine you are running for your life. Your survival depends on the mercy of strangers. Your home is in ruins and your neighbors have fled. There is no turning back. When you reach the crowded camp, you join thousands who ache for a life they will never know again. Exhausted aid workers explain that you’ll need to wait. You close your eyes and pray, day after day after day.

For millions of refugees, this is reality. But refugees are nameless and faceless, aren’t they? Far away from our lives...do we turn and look the other way?

Private sponsorship, a practice available in Canada’s immigration and citizenship system, allows groups of faith or five or more citizens (Groups of Five) to come together and sponsor refugees through the long immigration process and resettlement into Canada.

With support of the local Anglican Diocese and Mosaic (a Canadian immigration aid agency), Temple Sholom has been paired with a newlywed couple and a married couple with two little sons and will help them resettle and rebuild their lives in Canada.

This couple and family are from Al-Qamishli, a predominantly Kurdish city in Northeastern Syria, now a zone of terror exploding with violence. They left their homes years ago, spending time in a refugee camp in Kurdistan.

Commitment to sponsor this couple and family includes financial assistance, if needed, for a year after their arrival to Vancouver. However, sponsorship also involves meeting them at the airport, helping them find homes, find employment, enroll in school, learn the language and assimilate to a brand new culture. Sponsorship means getting to know them not as “refugees” but as people, forging bonds with them that will last a lifetime.

Rabbi Gropper, Rabbi Moskovitz and Cantor Marer have collaborated further on creating a refugee-focused Passover seder reading and ritual that are being distribute to all URJ congregations from the RAC.

Imagine running for your life, your survival depends on the mercy of strangers.  Now imagine being the ones to say “Here I am!” (hineni shalacheni), knowing your actions are making a difference.

Let’s put ourselves out there to form those bonds as well. Ask the RAC to pair you with a temple in Canada to lend assistance to their sponsorship of those caught up in the horror of the refugee crisis. Contact Legislative Assistant Rachel Landman at 202-387-2800 and visit rac.org/refugeecrisis to learn more about how your congregation can get involved.

Take action and urge you Members of Congress to respond to this global crisis by welcoming more refugees to the United States.

Karen Wallace Lipson is a member of Rye Community Synagogue in Westchester County, NY. She is active in the synagogue's 'Jewish Justice League' (JJL), a group that advocates for social justice by leveraging the collective voice of congregation members. JJL's areas of focus include Hunger, Gun Violence and Oppression (women, children, LBGT). Karen lives in Port Chester, NY with her husband Rich. They have four children and two dogs.

Every year on June 20, we honor the resilience and courage of refugees and celebrate their contributions to our communities and to our entire nation. The best way to honor and celebrate refugees is by taking action to make the U.S. a more welcoming place for those seeking safety.
Shabbat
Image