As a New US Citizen, I Know Won’t Take Voting Rights for Granted 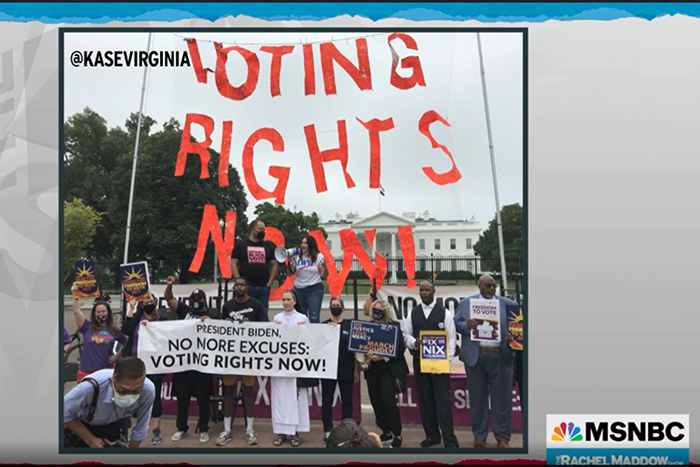 This past April, I became an American citizen. In a room with others from all over the world, with a mask covering my mouth and tears running down my face, I swore an oath to the United States of America. After celebrating with a burger and fries, I went home and immediately registered to vote, relishing the moment when I finally secured my place in American democracy.

While it took me just a few minutes to register, I am keenly aware that we cannot take our voting rights for granted. The ability to vote is a founding principal of our democracy, so on Tuesday, October 5th, I will use my first amendment rights as a new American to join with other leaders in protest outside the White House. We will gather and raise our voice every week to demand President Biden use the full power of the presidency to ensure the passage of federal voting rights legislation for the American people.

The use of executive power to protect our right to vote has never been more important: over 400 anti-voter bills have been introduced around the country in 2021 alone. Examples include the elimination of polling locations, reducing early voting, and enacting stricter voter ID laws.  Some laws sink to new lows, including the banning of providing food and drink to those standing in line to vote, many of whom wait for hours.

Let’s not beat around the bush here. These attempts to limit or restrict voting are not an effort to protect the integrity of our elections, as some would have us believe. Rather, they are a nefarious venture intended to silence the voices of Black and Brown citizens of this country, as well as immigrants and new citizens. They are a blatant attempt to prevent us from using our power to vote in representatives and new legislation that would reflect the desires of all the people, instead of just a select few.

Our Jewish tradition teaches us that a ‘ruler is not to be appointed unless the community is first consulted’ (Babylonian Talmud, B’rachot 55a). Every single one of us who makes up the tapestry of the United States, no matter of our heritage or the color of our skin, should be consulted.  And as a white Jew, a rabbi, and an American, I know that now is the time for me to stand as an ally in this fight, and to use my power and my privilege to amplify the voices of people demanding their fundamental rights.

The right to vote may simply be symbolized by a checkmark on a ballot. But to those of us who once lived on the outside looking in, voting is so much more than just filling out a form or pressing a button. It gives us a voice and ensures that no one, no matter their race, religion, or socio-economic status gets left behind.

Free and fair elections are the cornerstone of American democracy, and it should be up to the leader of that democracy, the President of the United States, to protect it. As a proud American, I intend to use my voice on October 5th to demand just that.

Rabbi Esther L. Lederman (she/her) is the Union for Reform Judaism's director of congregational innovation and sits on the Central Conference of American Rabbis' task force on the experience of women in the rabbinate.