It’s Time for our Government to Start Listening to Common Sense. 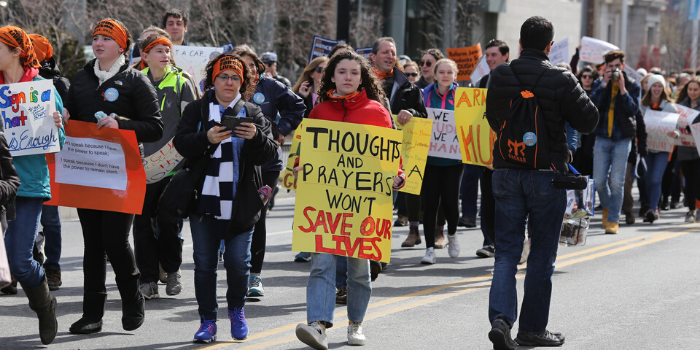 That’s the number of people who die each year from gun violence. That’s 36,383 mothers, fathers, sons, daughters, and good, innocent human beings, each with a bright, promising future that was suddenly, horrifically stolen from them. 36,383. That means that in 2019, gun violence killed an average of 100 people every day. That means that each day, 21 children under the age of 18 - young, innocent kids - are shot by guns. 36,383. And that number only encompasses one year.

To me, the worst part is that some of this death, some of this senseless violence and fear, could be prevented if our government would pass stronger gun violence prevention measures. But a small vocal minority prevents our government from creating change and saving lives.

A piece of legislation called the Brady Handgun Violence Prevention Act, commonly known as the “Brady Bill,” enacted in1993, mandated federal background checks on firearm purchases from federally licensed firearm dealers and led to the creation of the National Instant Criminal Background Check System (NICS). Since the Brady Bill went into effect in 1994, over 3 million people have been denied a firearm transfer or permit and countless lives have been saved.

However, a loophole in the bill allows for gun sales through a private seller, which includes purchases made online or at a gun show, without a background check. At least 1 in 5 guns sold in the US are sold legally without a background check, and many perpetrators of gun violence have been able to purchase their weapons legally through private sales, even if they’ve been convicted of crimes in the past.

Despite the progress made through the Brady Bill, our background check system contains a glaring hole. The leaders of our country must stand up to change this. Right now, they are only hearing the voice of a small minority which advocates against life-saving measures such as universal background checks. As a result, our laws prioritize those voices over innocent human lives.

There is something you can do to demand change and advocate for life-saving legislation: In February of 2019, the House of Representatives passed H.R.8, the Bipartisan Background Checks Act of 2019. This legislation would require background checks for private firearm sales. The Senate is currently considering its own version of this bill called the Background Check Expansion Act (S. 42). This bill would expand the federal background check requirement to private sales, including those made online or at a gun show, effectively eliminating the problematic loophole in the Brady Bill.

On January 30, members of the RAC Teen Justice Fellowship, a fellowship for alumni of the L’Taken Social Justice Seminars, are organizing a country-wide day of action to urge the senate to pass the Background Check Expansion Act, and we need your help. Join us on January 30 to contact your senators and demand that they vote to pass S.42. Eighty-nine percent of Americans, the vast majority, support the requirement of background checks on all gun sales. It’s time for our government to stop listening to a small minority of our population and start listening to common sense.