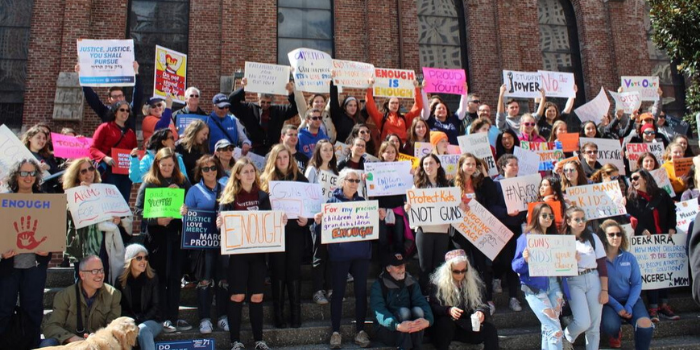 Young adults across North America have created a broad movement, thanks in part to the March for Our Lives, to show adults that their voices, safety, and futures can’t be ignored.

After seeing the power teens and young adults can harness to make change, the Religious Action Center of Reform Judaism and NFTY, the Reform Jewish Youth Movement, introduced the Gun Violence Prevention Fellowship for high school students. The fellowship is designed to educate high school students about gun violence prevention and give them concrete skills in community organizing to help them address gun violence.

The students were tasked with creating and implementing a gun violence prevention project in their own congregation and/or community.

One student, Cameron Samuels from Temple Sinai in Houston, decided to broaden the audience for his project by creating a website so people could look up their congressional representatives and view information on their positions regarding gun violence, including their voting records on gun violence prevention legislation and if they had accepted any gun lobbying funds.

Other teen Fellows sought to activate peers in their local communities.

Rachael Kisver and Avery Miller led a gun violence prevention program with their confirmation class at Congregation Beth Or in Ambler, Pennsylvania. They hung posters with questions such as, “When and where are guns appropriate to use?” and “How big of an issue do you believe gun violence is in our society?” After each student wrote their answers, they facilitated a discussion about the students’ opinions that brought different viewpoints into the conversation.

Another student, Madeline Denker from Beth Chaim Reform Congregation in Malvern, Pennsylvania, created a gun violence prevention night at her synagogue. She invited Shira Goodman from CeaseFirePA to speak about gun violence in Pennsylvania and held a postcard writing workshop so that people could ask their senators to oppose the NRA's Sue the City Bill.

“If I continue to make my voice heard someone will eventually start listening to the power of youth voices,” one student Fellow said.

Gun violence doesn’t just impact a community or a family. It reverberates around the country and the world. Young people are standing on the front lines in the fight for gun violence prevention, and their determination will play a role in pushing for much needed legislation. The RAC is proud to support these young organizers as they live their Jewish values.