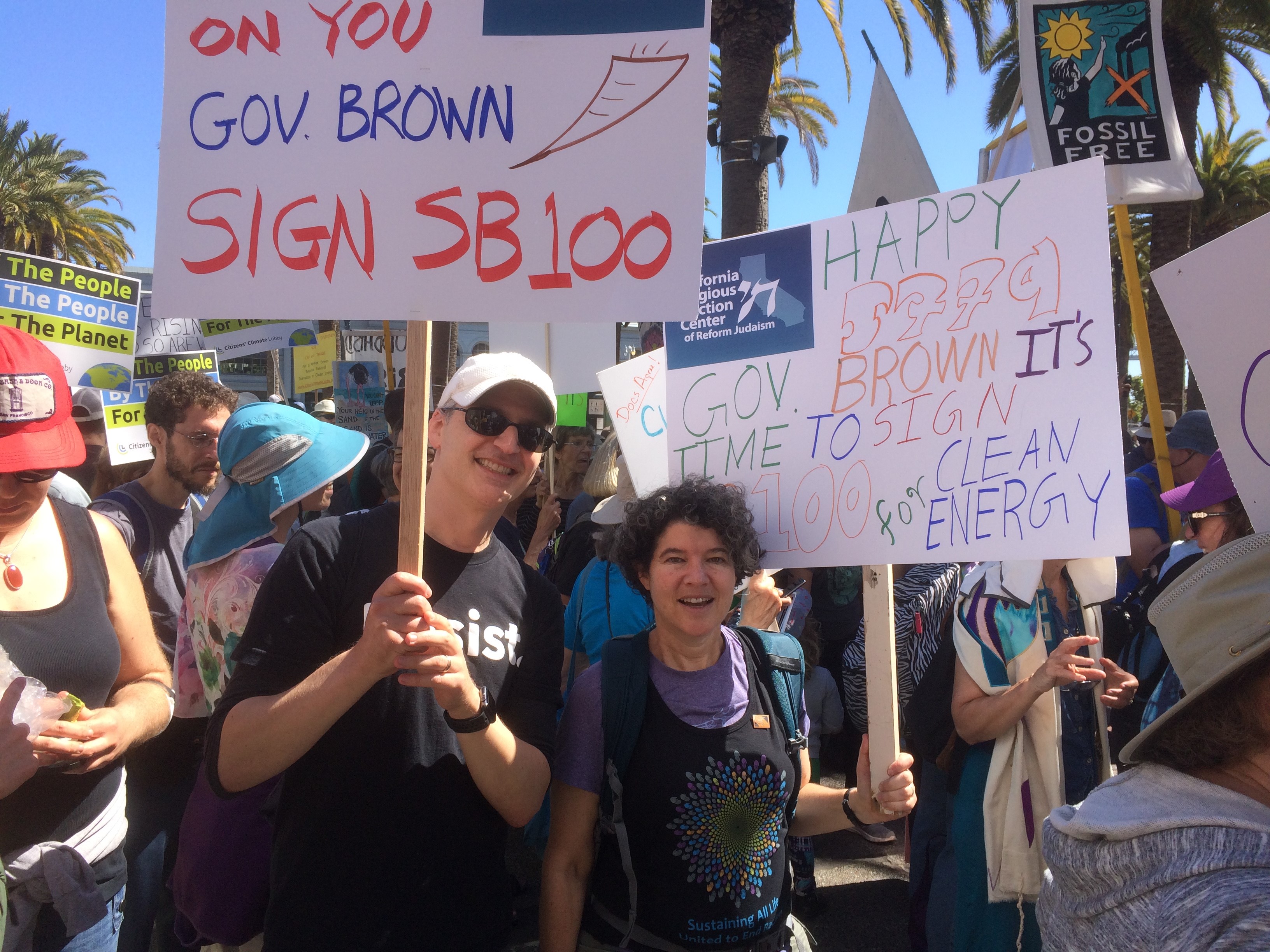 During the past year, RAC-CA’s Climate Advocacy Team helped mobilize Reform congregations around the state to advocate for Senate Bill 100, the 100% Clean Energy Act. This landmark legislation sets the bold but achievable goal of powering California with clean, carbon-free electricity by 2045 and provides a powerful example for other states and nations to follow. Our team was part of a large coalition of environmental and environmental justice, business, labor and health groups, local governments and faith communities all working together to advance this bill.

On August 28, we watched the livestreamed speeches on the Assembly floor and texted each other nervously from our homes and offices throughout the state, as representatives spoke passionately about science, the urgency of acting to turn climate change around, and the importance of California’s leadership. But other members of the Assembly argued our bill would be too hard on the economy and not realistic. We needed 41 votes in order for the bill to pass, but after those who knew their positions had voted, the 'yes' votes stayed stuck at 40 for several hours. We wondered if all of RAC-CA’s hard work on behalf of the bill would come down to one missing vote. Then, after 5 pm, voting was briefly re-opened, and 4 more votes came in. Over email and texts, we danced a virtual hora and imagined lifting each other up in a chair to celebrate. Then we started speculating about whether and when Governor Jerry Brown would sign the bill into law.

As we begin the New Year, many of us are worried about worsening climate change and the frightening risks it poses not only for our children but for future generations of all life on this planet. The literal meaning of the phrase tikkun olam, repair the world, resonates strongly as we become more aware of the impact of our actions on the entire planet.

The RAC-CA team was cheering and advocating throughout the entire process. Some of us work in the field of environmental policy or science and others are dedicated amateurs, learning to become leaders on one of the most urgent issues of our time. We made trips to Sacramento to testify in support of the bill. We galvanized Reform congregations to sign onto an interfaith letter of support for the bill. 200 rabbis, cantors lay leaders and teens from around the state traveled to Sacramento on for RAC-CA's annual lobby day, and many lobbied their legislators on behalf of SB-100. When the bill was sent to the full Assembly, we called synagogues in districts with Assembly members on the fence, and their clergy and leaders called to urge votes for the bill, all the way through to that tense afternoon when it finally passed.

As RAC-CA members prepared for the September 8 Rise for Climate March in San Francisco, the weekend before Rosh HaShanah, Governor Brown allowed the bill to sit unsigned on his desk. So we made signs for the march saying, “Happy 5779, Governor Brown, It’s Time to Sign!  SB 100 for Clean Energy!”  We put the governor’s phone number on our signs, and marchers read them and made the call as we walked together. Two days later, on Rosh HaShanah, Brown signed the bill. We think of it as a gift to the world on the day that we celebrate of the world’s birth.

During the week following the march, Global Climate Action Summit was held in San Francisco. We participated in the We Are Still In conference of cities, states, businesses and organizations who are committed to meeting the Paris agreement despite the President pulling out. We heard testimonies from activists on climate change and climate justice, speaking about the impact climate change is already having on the most vulnerable communities. Facts about rising sea levels and storms were made real in a story from a woman who woke in the night to find ocean waves had reached the door of her home in the Marshall Islands. The meaning of climate justice was clear from the testimonies of people in the Inland Empire of Southern CA, where low-income and majority Latino and indigenous communities live with toxic waste dumps and other hazards that wealthier communities don’t tolerate. The stories were told with power by leaders who are organizing for change.

We look to the New Year with hope that a growing coalition is coming together in the spirit of tikkun olam to take effective action to combat climate change. If you would like to join us in further efforts related to climate, please consider joining RAC-CA’s Climate Advocacy Team, or contact us about connecting your congregation to our work. 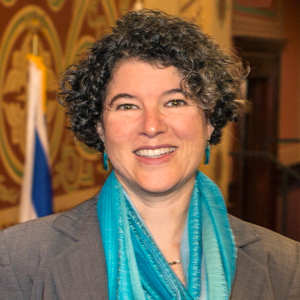 Rabbi Julie Saxe-Taller is Senior Organizer for the California Religious Action Center of Reform Judaism (RAC-CA). She supports congregational social justice teams and builds the network of congregations who are harnessing a statewide voice for justice as Reform Jews. Previously, she served Congregation Sherith Israel in San Francisco, from 2004 to 2017. Rabbi Saxe-Taller is passionate about bringing the spiritual, creative and justice-seeking elements of Judaism together, as they are meant to be.

Bob Kibrick is a member of RAC-CA’s Climate Advocacy team and of the Social Action Committee of Temple Beth El, Aptos, CA.