Bring Back the Child Tax Credit 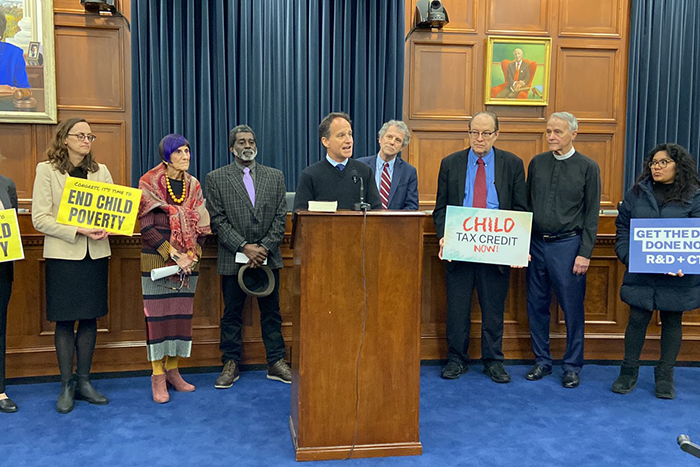 The following blog post is adapted from remarks given by Rabbi Jonah Pesner, Director of the Religious Action Center of Reform Judaism and senior vice president of the Union for Reform Judaism, at a press conference on Capitol Hill on Thursday, December 15, 2022.

Time is Running Out: Urge Congress to end child poverty and expand the CTC by the end of the year.

I am Rabbi Jonah Pesner
of the Religious Action Center
and Union for Reform Judaism,
the largest and most diverse denomination
in Jewish life.

I am a rabbi in part because
When my father died suddenly
When I was a child
My single working mother,
My brother and I were cared for by our rabbis
And our Jewish community;
But we also survived that tragedy
And even thrived
because we lived in affordable housing
attended safe, funded public schools,
and received federal assistance for college.

I know personally the role
Society and government plays
In protecting our children.

So it is my honor to open this gathering
with words of prayer and scripture,
though like many of you,
it fills me with regret and shame
that we must gather today.

Perhaps the falling rain
are tears from the heavens,
weeping from above,
crying out:

Why have you forsaken my children?
Your children…

"I was young and now am old
Never have I seen a righteous person forsaken
Nor their child begging for bread."

How can we live in a time,
when millions of children beg daily for their bread?
Across the globe to be sure -
but right here in Washington DC,
our very capitol and across our entire country,
Perhaps the richest nation in history.

Had our nation and its leaders turned their back
on our children in their suffering
It would have been bad enough.
But they saw,
they heard the voices
of the children begging for their bread
And they acted.
With the American Rescue Plan of 2021,
Congress temporarily expanded the Child Tax Credit
Lifting more than 5 million people,
including nearly 3 million children,
out of poverty.

And one year ago today, December 15, 2021
the last expanded Child Tax Credit payments
were delivered to families.
Since then, more than 3 million children
have experienced poverty and hunger.

God forgive us for.
Hatanu lifanecha - we have sinned before you
Hatanu lifnei yaldeinu -
we have sinned before our children.
There is a powerful midrash,
a legend in the Jewish tradition
that when God offered the Torah to our ancestors -
the sacred scrolls
that would be the foundational scripture
for Jewish, Christian, and Muslim theology and practice
and would inspire generations across all faiths
assembled at the ancient mountain
the legend holds God demanded:

After a long pause the elders heard a baby crying
and in one voice proclaimed:
"Our Children!
Our Children will be our guarantors!"

And with that the Holy One was revealed;
And the Torah was given to the people.

Forgive us this year of suffering of children
Agitate us lest we continue to ignore their pleas
Inspire us to hold our leaders accountable
As we demand they hear the cry.