Pride Month, which occurs during June each year, is a time to lift up the voices of those who champion the LGBTQ identities, listening to their stories and working in coalition to create a world of greater equality and inclusion. During this Pride Month, we are featuring guest blogs by Reform Jews who are members of the LGBTQ communities.

The king of Egypt spoke to the Hebrew midwives, one of whom was named Shifra and the other Puah, saying, “When you deliver the Hebrew women, look at the birthstool: if it is a boy, kill him; if it is a girl, let her live.” The midwives, fearing God, did not do as the king of Egypt had commanded; they let the boys live (Exodus 1:15-17).

This text from parshat Shemot introduces us to two revolutionary women who instead of following the law of the land, refused to follow Pharaoh’s decree and saved the lives of the children in their care. In the Talmud, our Sages teach that not only did they not kill the children as Pharaoh had commanded, but they even provided them water and food, as indicated by the phrase “But they kept the male children alive.”

In June 1969, we were introduced to two more revolutionary women, Marsha P. Johnson and Sylvia Rivera. These trans women of color, though often whitewashed from Stonewall’s history, were two of the major figures of the riots and the uprising that followed which led to the present-day LGBTQIA movement. They too resisted discrimination and police harassment, and like their forbears in the Torah, they “kept the children alive” via their group the Street Transvestite Action Revolutionaries, which worked with homeless drag queens and transgender women of color in New York City.

It was these ancient and recent memories that propelled me to lift my voice as a Black-Trans-Jew during and after the Ferguson uprising. My drum and I went to the streets of Ferguson to stand up against the continual discrimination, harassment and violence black and brown people in the United States face.

Isaiah 17 states, “Learn to do good. Devote yourselves to justice; aid the wronged,” and I believe the Torah is clear that it is indeed my spiritual obligation as a Jew to stand up for justice, to acknowledge the recurrent pain and trauma that white supremacy enacts on communities of color, those living in poverty, individuals with different abilities, those who are sick, LGBTQIA folks and every other person who gets marginalized because they are not a white cisgender man.

It is in our ancestral DNA to be on the frontlines of justice. And there is no time to sit on the sidelines while people are stripped of their dignity and humanity daily.

So in the spirit of our mothers Shifra and Puah, Marsha and Sylvia, I ask you:

How are you challenging and transforming discrimination, harassment and violence into inclusion, equality and justice in your life, in your community, in your country and in our world?

How are you keeping the children alive? 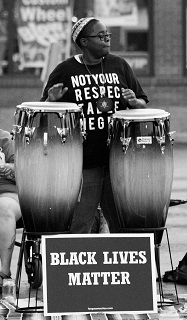 Dr. Koach Baruch Frazier, a Black/Queer/Trans/Jew is a healer and musician who is working towards the day when everyone experiences liberation. He spends his days helping people reconnect with the world around them through better hearing and providing love and support through revolutionary listening. Koach's heart beats to the rhythm of tikvah, t'shuvah and tzedek.