On Monday, May 14th, I was arrested for participating in direct action with the Poor People’s Campaign: A National Call for Moral Revival. I was officially arrested for “crowding, obstructing or incommoding” at the United State Capital, along with over 150 people. This was happening in state capitals around the country. This past Monday, hundreds more were arrested at the Capitol and around the country, including rabbis, cantors and Rabbi Jonah Dov Pesner, the director of the Religious Action Center.

I went because Reverend William Barber called on us to join him. He came to the URJ Biennial in December not only to deliver an inspiring sermon, but he came with a deliberate ask for the Reform movement. He told us, “We need a moral breakthrough.” He shared with us a litany of heartbreaking data, about the high cost of being poor in America, the disproportionate impact on women and children. About the crisis of mass incarceration. About environmental degradation. About the dismantling of the Voting Rights Act. About the scapegoating of immigrants. About the United States’ astronomical investment in the military machine. About the false narrative of saracity in a country that is home to overwhelming abundance. And then he shared his vision for the Poor People’s Campaign, and he asked us to join his cry for justice. He finished his call to us by saying, “America Needs a moral breakthrough and it only will happen if we stand up together and make it happen. And if we do, God, God, God, will be on our side.” Imagine him roaring this last line like a prophet who somehow found himself on a stage in the Hynes Convention Center in Boston, speaking to thousands of Reform Jews.

But he did not find himself on that stage by accident. He knew exactly who he was addressing. He knew that we are a powerful movement, dispersed around the country. That we are the movement of the prophets, of olden and more modern times. He came to Boston knowing that we would be an important part of the fusion movement that he was building, across so many lines of difference.

That night in Boston, I looked at a member of Temple Sinai, who was sitting beside me and we made a pact to be there in the Capitol with Reverend Barber when the time came. And we did, on Monday, three of us from Temple Sinai, along with people of faith, and courageous, impacted people from around the country. We stood in solidarity with the 140 million poor people in this country and sang together, “Somebody is hurting our people, and its gone on far too long, and we won’t be silent anymore.” 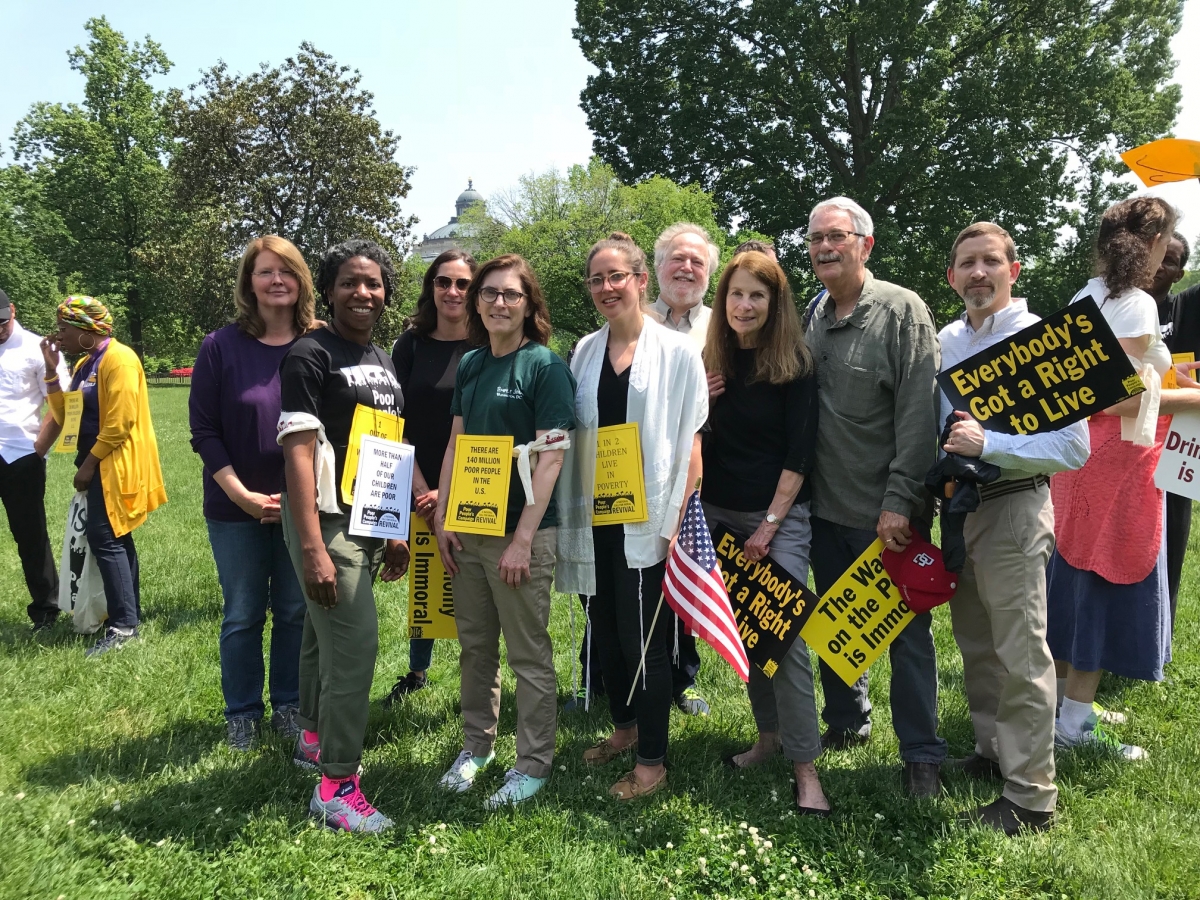 In 1964, Dr. Martin Luther King sent a letter to Rabbi Israel Dresner. The Senate was considering the Civil Rights Act and Dr. King wanted to keep civil rights at the center of the national conversation. He was staging a massive campaign in St. Augustine, Florida. Dr. King’s letter said, “We need you down here with as many Rabbis as you can bring with you!” Rabbi Dresner shared the letter at the Central Conference of American Rabbis Conference. He came, one of 16 rabbis and the director of the Commission on Social Action. They were arrested for trying to integrate the Monson Hotel and Chimes Restaurant. They spent the night in the St. Johns County Jail.

There, they wrote a letter, entitled "Why We Went." In their letter, they wrote, “We could not pass by the opportunity to achieve a moral goal by a moral means – a rare modern privilege.” 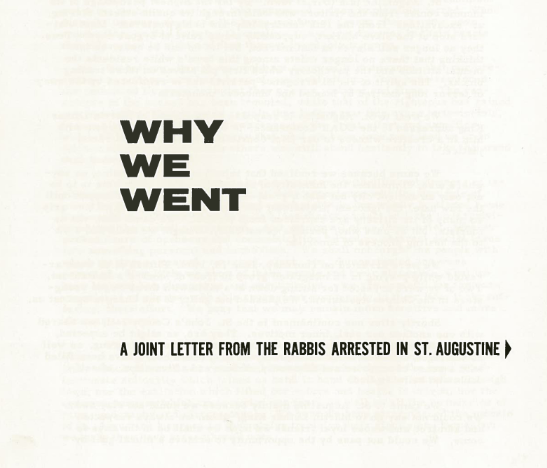 It took great courage for them to do what they did. To be arrested in a time and place hostile to everything their action represented. To enter into a justice system that had proven itself unjust. They put themselves at risk to show up when Dr. King called.

Our arrest was pre-planned and pre-negotiated. There was little risk, as Capitol Police are accustomed to arresting those engaged in civil disobedience. For them, it was just another day at the office. There is no comparison between the courage required of those 17 Reform Jews in the St. Johns County Jail, and our improvised processing station on the capitol lawn.

But, I have often thought about those rabbis over the past 5 years of my rabbinate. Their prophetic example a source of inspiration. They were Rabbi Eugene Lipman and Rabbi Balfour Brickner, the founders of Temple Sinai in Washington, DC where I serve. They were Rabbi Eugene Borowitz and Al Vorspan, my professors at Hebrew Union College. They taught us that Judaism does not stop at the sanctuary walls, but that it must infuse the lives we lead, the risks we take, the moral opportunities that we cannot let pass us by.

I write this because there are 4 more weeks and countless ways to get involved in this emerging campaign calling for a moral breakthrough in this country.  I write this because Reform Jews have been listening to the cry of the prophets since the inception of our movement. I write this because I believe that on that cold evening in December, Rev. William Barber offered us a rare modern privilege...to achieve a moral goal by a moral means.

Hannah Goldstein serves as an associate Rabbi at Temple Sinai in Washington, DC. She is a member of the current cohort of Brickner fellows.To participate in the Poor People's Campaign in your state, visit www.rac.org/poorpeoplescampaign.