You Shall Not Oppress a Stranger

You Shall Not Oppress a Stranger

A Rabbi’s Reflections on Civil Disobedience in Support of DREAMers

Every time I walk into my office, I see two pictures, one to the right and one to the left of my door. On the left is a photo of Dr. Martin Luther King, Jr. and Rabbi Joachim Prinz, Temple B’nai Abraham’s rabbi from 1939 to 1976. To the right, is a picture of these two civil rights leaders marching with many others, including our congregation’s former president, Peter Klein, at the March on Washington in 1963.

V’eleh hamishpatim -- these are the rules that you shall set before them. This past week’s parsha, Mishpatim, is about rules, given as religious and moral instructions by God. As explained in our Torah commentary, Etz Hayim: “Our standards for how we treat others must be based not on social-utilitarian concerns, the desire for an orderly society, but on the recognition of the image of God in every person and the presence of God in every relationship.” [Etz Hayim, p. 456]

We are all created B’tzelem Elohim -- in God’s image. Whether we are Black, Asian, White, short, tall, with curly hair, or no hair, male, female, transgender, American, Australian, or undocumented.

During the last few weeks of our Torah reading cycle, we read from the Book of Exodus, the core story of the Jewish people. We learned about the suffering and enslavement of the Israelites; the defiance of strong women, Shifra and Puah -- the midwives who refused to kill the male Hebrew babies as Pharoah decreed; the liberation from Egypt; and the giving of the 10 Commandments. It’s been an intense few weeks of episodes you certainly don’t want to miss (or at least record on your DVR to watch after the Superbowl).

In this past week’s parsha, we learn about many rules to create a just society. One that is repeated twice here and at least three dozen times in the Torah tells us:

“You shall not wrong or oppress him, for you were strangers in the Land of Egypt” Ex. 22:20

“You shall not oppress a stranger for you know the feelings of the stranger having yourself been strangers in the land of Egypt.” Ex. 23:9

Earlier in the Book of Exodus, we are commanded: “There shall be one law for the citizen and the stranger who dwells among you.” Ex. 12:49

And later in Leviticus we hear the positive version of this concept: V’ahavta l’reyecha kamocha, Hebrew for “love your neighbor as yourself.”

This week, I reflected deeply on these verses and this portion’s emphasis on establishing a just society. I participated in a rally at Congressman Leonard Lance’s Westfield office -- sponsored by Make the Road New Jersey and Faith in New Jersey -- to support the passage of the Dream Act.. DREAMers are people who were brought to the United States as children and until the Delayed Action for Childhood Arrivals or DACA was established 6 years ago, they were not able to work, go to college or get driver’s licenses. This policy helped them pursue their dreams and contribute to our society. As we know, DACA is set to expire on March 5. This means that these DREAMers may be deported. 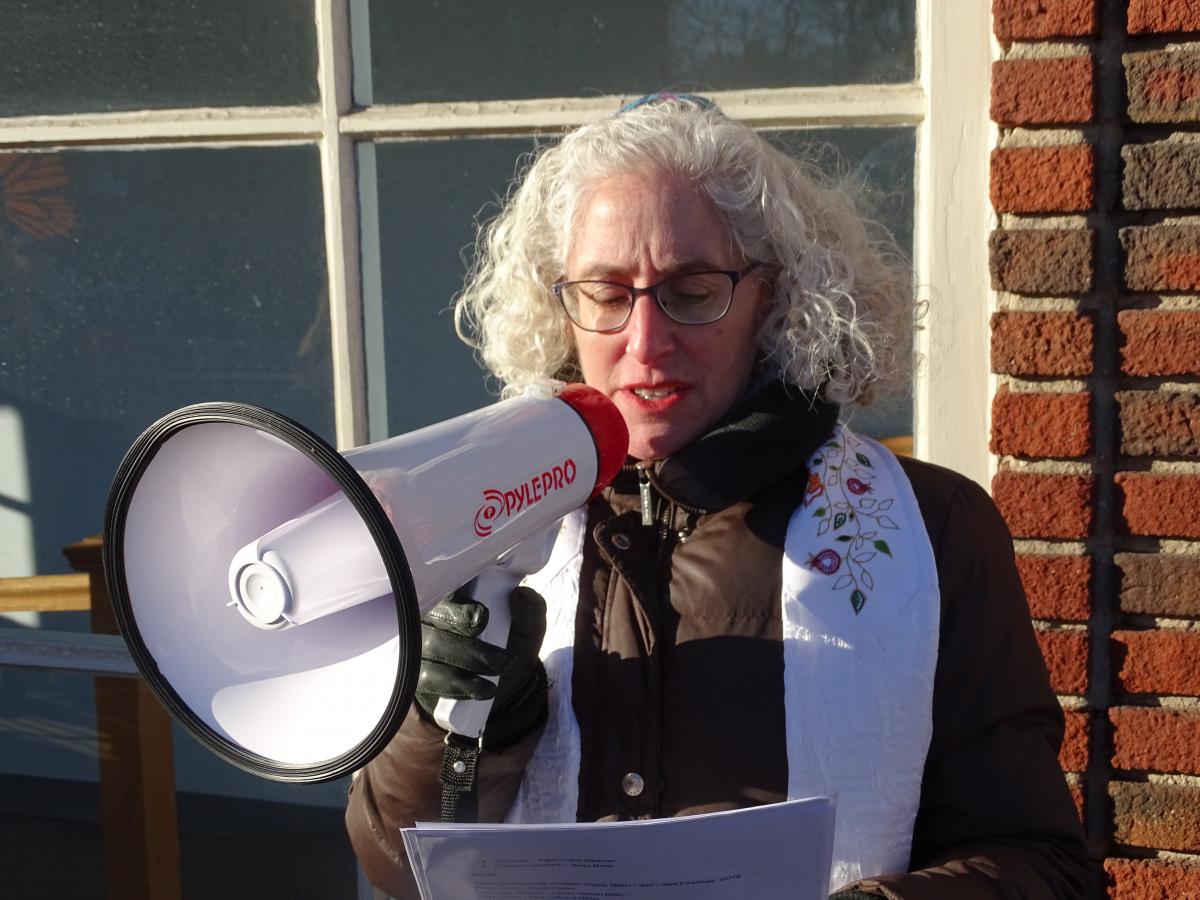 Imagine being at risk of being sent to a place you don’t know at all and having to leave the only home you know.

At the rally at Congressman Lance’s office, I and other clergy spoke, sang, chanted and heard testimonies from DREAMers. One woman shared that she is a college senior set to graduate this May. Her DACA expires in August. She is unable to focus on her post-graduation plans because of concerns that she may be deported.

My second son, Benjamin, is graduating college in May. While he may be stressed figuring out where to work and live, he does not have to worry about being forced out of his home country. 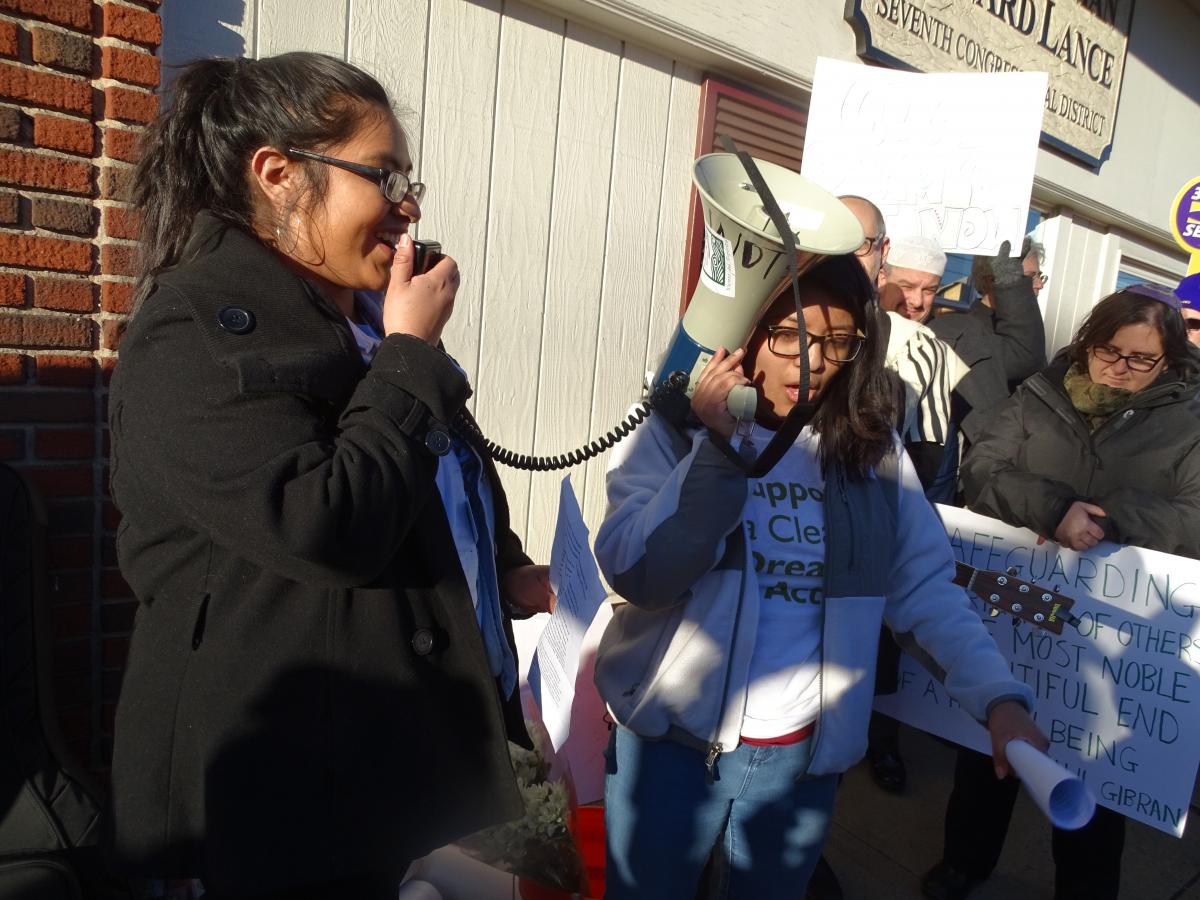 Myself and five others that took part in the rally had decided to participate in an act of civil disobedience. We entered the Congressman’s office where I read a letter addressed to him. It was received by his office staff because he was in DC last week. One of his staff members listened attentively and thanked us. We were invited to meet with him in DC or at his Westfield office when he returns. We thanked her and then took a seat. We explained that we were not leaving. After prayers, chants and songs, we continued to sit in protest. Through the office window we could see people from the rally offering their support. We could hear them singing too and joined in with them.

When the office closed at 5:00 pm, we did not leave, and the police were called. They arrived and informed us that if we did not leave they would arrest us. We did not move. They asked us to stand and walk out one at a time at which point we were handcuffed. They then led us to the police van which took us to the Westfield police station. The policemen continued to be polite and gentle. We were a group of 6, light-skinned adults -- of whom 4 were clergy.

Why did I decide to get arrested? Because this was a concrete way to put my faith in action and amplify this issue. I have attended and participated in many rallies this past year. I fight for DREAMers to protect the future of our country, including, for example, this year’s college graduates.

Waiting for us at the Westfield police station were organizers of the rally, including a woman named Cinthia, who we found out was a  DREAMer herself. I was touched to later learn what she said outside of Lance’s office when we were protesting inside: “What you guys are doing right now is making me so emotional. It inspires me and when I get my documentation, I’m going to run for Congress.”

My handcuffs were tight, but my discomfort in the moment paled in comparison to the fear others are living with each day.

As I reflect on last week’s torah portion, Mishpatim, I am called to stand up for the rights of DACA recipients and DREAMers. I urge my community to do the same, and ask our representatives in Congress and across the country to push for a clean Dream Act. We must fight to uphold protections for undocumented neighbors and strangers alike.

To be connected with your Senators' and Representative's offices, text RAC4DREAM to 877877.