Why I Risked Arrest to Help Pass the Dream Act

Why I Risked Arrest to Help Pass the Dream Act

On Wednesday, January 17, leaders representing the Religious Action Center of Reform Judaism joined Bend the Arc Jewish Action, the Anti-Defamation League, T'ruah and other Jewish organizations in an act of civil disobedience in the Russell Senate Office Building to demand immediate passage of the Dream Act, bipartisan legislation that will protect nearly 800,000 immigrant youth from imminent deportation. Jewish leaders from across the country were arrested by Capitol Police while protesting in support of Dreamers.

As days continue to pass with no Dream Act in place, filling so many of us with frustration, anger and helplessness, I was lucky enough to experience a moment of grace as I gathered with over 100 Jews in our nation’s capital on January 17 to demand a clean #DreamActNow.

Many have spoken eloquently and powerfully about Wednesday’s civil disobedience action in the Russell Rotunda – the sounds of our voices in song, the power of sitting together below as DREAMers and Jewish supporters watched, waved, and cried from the balcony above. This cherished moment will give me strength in the days to come, and I am so very grateful.

I’m appreciative of the many who have praised my courage in risking and going through the arrest process. But truly, for this action courage played a very small part. We were blessed to have great organizers who prepared both us and the Capitol police for what to expect, we were never alone, and we were buoyed by the spirit of song, shared purpose, and our Jewish identity so present with us.

The courage I did need to come to this place is inspired by the DREAMers who act courageously every day. DREAMers built this movement, we are honored to support it, and we are deeply inspired by those immigrant activists who day in and day out speak out for their right to stay in the only home they have known. 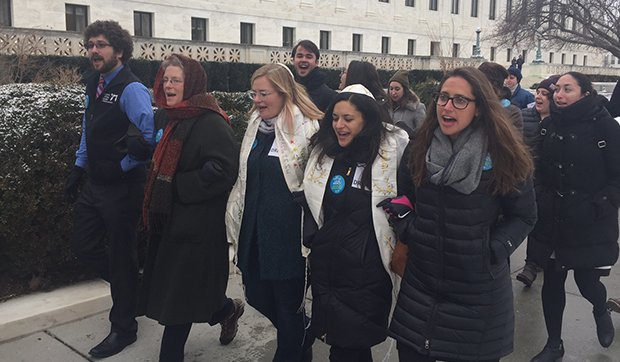 We were blessed to receive international news coverage, lead stories and live feeds for our action. Less known is that DREAMers of United We Dream and other organizations also traveled from across the country and have been engaged in actions all week in Washington, standing outside congressional offices, often not being allowed entry, and constantly making sure not to cross the line to arrest as they would then face deportation. For months they have shown dogged determination and incredible courage.

Elias Rosenfeld, a DREAMer who has shared his journey both in webcast with Rabbi Jonah Pesner and in person at our Immigrant Justice learning session at Biennial, notes that he has met with every senator and over 200 representatives over the past months in support of the Dream Act.  This week he spoke in a press conference for the Dream Act, organized by Nancy Pelosi. His public sharing of his personal story gives a human face to what is at stake for him and 800,000 Dreamers. And he is not alone, as all who have gathered in Washington have taken this risk of publicly sharing their plight.

Several DREAMers from United We Dream joined our group for our debriefing session and shared their experience of our action. They spoke of their painful sense of rejection and isolation since DACA was rescinded, and their overwhelming emotion at the Capitol, when they realized that “you were doing this for US, when you had nothing to gain.”

All the emotional intensity of the week came flooding through my tears with that sentence. Because even though the Dream Act would not directly affect most of us, we had everything to gain by taking this action.  As I shared with her – we were raised to believe that this country is a place of welcome and refuge for all, that our own immigrant stories have drawn on this promise, and that our Jewish values compel us to defend it. We gain everything when we insist that a Dream Act be passed to uphold those values, when we unite as Jews to publicly act on this moral imperative, and when we have the gift of meeting together and joining in the DREAMers’ movement. For me personally, this moment drove home the fact that I was there not just because it was the right thing to do, but because my heart and soul are tied to how we stand up for each other. For my children and grandchildren to come, we must succeed.

Also, when we welcome DREAMers and other immigrants, we gain the gifts they bring: their culture, their contributions to the economy, their values of hard work and community.

The clock is ticking, and the work must continue. Here’s what we all can do:

If you need help figuring out how to take these actions, or need a friendly ear, or want to join longer term actions through our Immigrant Justice Campaign, please connect with the campaign at www.rac.org/NAIJC.  Someone from our Immigrant Justice Leadership Team will be very glad to talk with you.

I have so much gratitude for those who I shared this experience with, for the organizers who made it happen, for the certainty that we will move forward together. “Just like a tree that planted by the water, We Shall Not Be Moved.”

Liz Cohen is a member of the Commission on Social Action of Reform Judaism and a Co-chair of the Urgency of Now Immigrant Justice Campaign. She is a member of Temple Beth-El in Hillsborough, NJ.