This phrase, carved into the façade of the Supreme Court, is avalue towards which our justice system aspires, especially when it comes to criminal justice. For example, we know that Black males serve prison sentences 20% longer than white males who commit nearly the same crimes. Even in cases in which they have similar criminal histories, white men are sentenced less harshly than their African-American counterparts. From the smallest drug offense to the most egregious capital murder, the evidence shows that racial bias pervades sentencing within the criminal justice system. In fact, if African Americans and Hispanics were incarcerated at the same rates as whites, today's prison and jail populations would be cut in half. This disparity is explained in large part by the different sentences given for similar crimes, the most quantitatively measurable facet of the fact that marginalized groups navigate the criminal justice system under fundamentally different treatment.

Although inequity within the justice system is not limited only to sentencing, a prison sentence impacts the lives of individuals and communities more than any other element. It is true that there are discrepancies between how the police interact with communities of color and more privileged communities, and jury selection is often biased. Yet the million incarcerated African Americans in the United States are the most visible and damaging effect of this bias. When one third of black men are imprisoned at some point in their lives, when it becomes normal in some communities to follow the pipeline from school to prison, the problem extends to all of society and requires us to act. When a person serves a longer prison sentence for the same crime, it means more opportunities to learn valuable skills are lost, and that fewer days can be spent striving to make a better life for that person’s self and family. The fact that skin color so closely correlates to the length of a sentence is a gross injustice.

This simply does not square with our Jewish values. Leviticus 24:22 declares that “there shall be one law for all of you,” for everyone created b'tzelem Elohim, in the Divine image (Genesis 1:27). Nowhere does the Torah say “an eye for an eye, unless the offender is a Samaritan, in which case also take 20% of the other eye.” In the Union for Reform Judaism’s 1999 resolution on Race and the U.S. Criminal Justice System, an entire section is dedicated to eliminating the disparities in sentencing that existed then and exist now throughout the law. Specifically, it talks about the most transparent discrepancy: between sentences for powder and crack cocaine. When it was passed, a hundred times more, and now eighteen times more, powder cocaine than crack cocaine triggers the same mandatory minimum sentence. That means that crack users, who are 79% black, are punished more harshly than the more racially diverse users of powder cocaine, for using the same chemical. This goes directly against our Jewish teachings, that unless a standard is upheld equally for all people, it’s not a fair law.

These disparities call us to action.  Join us: urge your Senators to support the Sentencing Reform and Corrections Act , which would take much-needed steps to address the racial disparities in the criminal justice system, by addressing sentencing and corrections, all aimed at curbing mass incarceration. \ 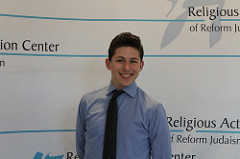 Jason is a 2016 Machon Kaplan intern and a rising sophomore at the University of Texas at Austin. He interned with the NAACP Washington Bureau on criminal justice reform issues.