Eleven years ago, Palestinian civil society groups created a call for a series of universal boycotts, divestment, and sanctions (BDS) against Israel. The actions that have followed for the past decade have become increasingly more prevalent, especially on college campuses.

As a college student, being able to be true to both myself, including my Jewish identity, has been both extremely important and a necessity to my wellbeing. Anti-Semitism, the hostility towards the Jewish people and anti-Zionism, the hostility towards Israel as the Jewish state, are not universally interchangeable. That being said, AMCHA Initiative ran a study in 2015 recording anti-Semitic occurrences and BDS expression on college campus. Within this study, they determined that 95% of schools that had BDS activity also had at least one occurrence of anti-Semitic expression. As BDS-related expression became more prevalent on campuses, so did the number of anti-Semitic incidents.

Rabbi Hillel said, “Be as one of the students of Aaron – loving peace and pursuing peace, loving people and bringing them closer to the truth” (Pirke Avot 1:12).

There is no way to obtain peace with the BDS movement in place. In order to achieve security for Israel and for the Jewish people on college campuses around the world, we need to vigorously oppose BDS and have open discussions about how it places obstacles in the path for peace instead of moving us further down the road.

The biggest step that one can take towards ending BDS activity on college campuses is to become more aware of the situation in your community. I was shocked at the amount of BDS-related incidents on college campuses of which I was unaware. It is important to get involved with your community and participate in the conversation, making sure to shed an accurate light on the state of Israel. The Jewish community is at a vital point in the fight to end BDS as one of the ways to move toward establishing peace between Israel and Palestine. To learn more about the current efforts to create a two-state solution in Israel and oppose the BDS movement, visit the RAC’s new BDS issue page and visit the RAC’s Israel issue page. 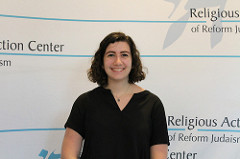 Rebeca Feldman is a rising sophomore at American University, where she is majoring in Political Science. As part of the Machon Kaplan program this summer, she interned at Americans for Peace Now.