We Can Make an Impact for Immigration Reform

We Can Make an Impact for Immigration Reform

In the Machon Kaplan (MK) program, I have received a total crash course in Jewish social justice in Washington, D.C. I had first dipped my toes into the concept in NFTY (the North American Federation of Temple Youth) and in my temple youth group, and then went further during my first year studying at Brandeis University, a very socially-conscious institution. However, interning at the Religious Action Center for Reform Judaism (RAC) - the intersection of Reform Judaism, politics and social justice - I find myself fully immersed in faith-based political advocacy, and loving it.

MK has gone above and beyond my expectations: the program provided a strong new community of friends, numerous networking activities with real D.C. professionals and other young hopefuls like me, opportunities to explore Washington, and lessons in life and in politics. I had the chance to lobby on Capitol Hill and to make coffee dates with professionals at high-profile organizations like the Federal Reserve and Politico. I feel like I am truly in my place.

Not only have I learned that I love and thrive in D.C., but I also found out that my voice matters. By sharing my opinion in conjunction with others, I see firsthand that advocacy can lead to systemic change.

Thus, I want to talk about the importance of immigration reform. In the United States, we pride ourselves on being a melting pot of diversity and the land of opportunity for those seeking economic, social, political, or other gain, yet this narrative is not quite accurate for many people. How can the “American Dream” exist when so many struggle to even become American? Further, research shows that immigrants bring business and help create jobs, stimulating economic growth.

I have seen firsthand the struggles of those who have immigrated to the United States. I have seen friends face inexcusably long delays and unnecessary difficulties in obtaining visas, leaving some no other choice but to break the law in order to live here. Others are separated from their families because only a few members could immigrate legally: my friend Farah has spent three Father’s Days in the U.S. without her father, while he remains in Syria due to the faulty immigration system, and her mother must take care of my friend and her two siblings alone. I know these challenges are widespread for those hoping to immigrate to the United States, or for immigrants currently attempting to stay here permanently. We must reform the current immigration system to better address the issues at hand and to better ensure the dignity of immigrants and asylum-seekers, and their families..

The history of the Jewish people recounts a persistent need for movement in the face of adversity. The Torah teaches us that our history as “strangers” in Egypt demands that we love other “strangers” as we love ourselves (Leviticus 19:33-34). This intersects with what we are taught as Americans – all people should have equal access to life, liberty and the pursuit of happiness.

Just as I found out that my voice matters, so does yours. We need to pressure our leaders for comprehensive immigration reform, including reducing waiting times for separated families, providing wage and workplace protection for immigrants, creating avenues for non-citizens to obtain citizenship and instituting more effective border protection policies. Urge your representatives to support legislation that improves opportunities for immigrants and visit the RAC page on immigration for more information. Your voice, when combined with those of other concerned individuals, can make a difference for the lives of immigrants. 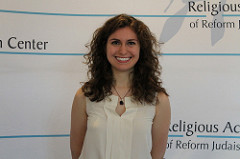 Hannah Brown is a rising sophomore at Brandeis University, studying economics and international and global studies. Hannah worked with the Religious Action Center for Reform Judaism (RAC) during the Machon Kaplan program.