For Texas, Reproductive Justice is a Numbers Game

For Texas, Reproductive Justice is a Numbers Game

Lubbock is pretty much your standard American city, with one major difference. The Fifth Circuit Court of Appeals upheld a Texas law that puts very strict regulations on abortion clinics (causing many to close). Now, a woman from Lubbock would have to drive at least five hours in order to obtain a legal abortion. And that’s just for the initial visit. She must then potentially make that same five-hour trip again after a mandatory waiting period of 24 hours to "reconsider her decision."

I grew up in a place where debutante balls were common. White dresses supposed to symbolize purity to remind us all of the imperative to abstain from sex.

The Texas law would impose an undue burden on 17% of Texas women and their access to reproductive health care. Undue burden, so they say, is only undue if enough people will suffer.

If we start drawing lines, where should they stop? What percent makes the burden undue? 20%? 30? If less than half of the people have a burden imposed on them, is it still not undue? Jewish theology teaches that every person is made b’tzelem Elohim, made in the image of God. How can we call ourselves people of faith if we try to quantify the essence of the Divine on earth?

Right now I am in the city where everything happens, where changes can be made. And I feel helpless. Because there are women far too close to the house I grew up in who are carrying the burdens of unplanned pregnancies, that might only increase without adequate access to childcare.

These women are being denied their rights, and the Fifth Circuit Court believes this isn’t an undue burden. Luckily, the Supreme Court stepped in on June 29 and blocked this law from taking effect, but the battle to defeat this highly restrictive bill is far from over.

I feel burdened. I feel empathy the size of Texas for my home state. I am in this fight. There is no turning your back on your home. I would like to remind the Fifth Circuit of our proudly proclaimed motto, our symbol of strength. I would like to say to them: 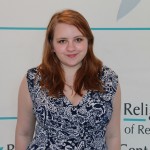 Megan Sims is a rising sophomore at Harvard College, where she plans to study Folklore and Mythology and competes on Harvard's slam poetry team. She is a summer 2015 Machon Kaplan participant and is interning at the National Council of Jewish Women.