The Movie Selma: Where is Heschel?

The Movie Selma: Where is Heschel?

The movie Selma moved me very deeply, and I was impressed with the superb acting (especially MLK) and brilliant writing. But I was also troubled that this movie (so clearly on the side of the angels) unwittingly continues a trend I have watched for decades with mounting discomfort—the gradual bleaching out of the Jewish role in the civil rights revolution in America. To put it bluntly, as a friend, Larry Bush, put it to me: where was Heschel?

The murdered Christian clergyman was respectfully recalled. What appeared to be a Greek orthodox prelate, in garb, was glimpsed in the front row. But Rabbi Abraham Joshua Heschel, certainly one of America’s most renowned and prophetic religious leaders, was not mentioned, nor viewed, though in real life Heschel was sitting in the front row with King’s carefully selected partners in the struggle for equal justice.

I know this may sound like small-minded Jewish score-keeping but, having participated in this struggle non-stop for 50 years, I can say flat out: without Jewish participation, there would not have been a civil rights victory. I myself was with King from the beginning days of the Montgomery bus boycott, mayhem in Birmingham, the march in Selma, the garbage strike in Memphis. Along with me, and in other strife-laden towns, were untold numbers of rabbis and Jewish lay persons, many of whom could not name a Hebrew prophet or identify the Jewish values driving them to action. With 16 Reform rabbis, I had the honor of going to jail in St. Augustine, Florida with King and Reverends Abernathy, Williams and Vivian.  We were arrested for the crime of trying to have lunch together in the town’s nicest restaurant and we were placed in the custody of the sheriff who was also the grand dragon of the local KKK.

The movie focuses on the shifting struggle between MLK and LBJ. But the truth is that the real stage was much larger and more complex.  The NAACP was a major player in this drama. Roy Wilkins, director, and Clarence Mitchell, Washington director, were crucial in the fierce lobbying of the president. The voting rights bill was drafted by a superb group of black and Jewish lawyers, on behalf of a broad coalition of decency assembled under the banner of the Leadership Conference on Civil Rights. That pivotal body was housed in the newly established Religious Action Center, the Washington headquarters of the Reform Jewish movement. The bill was drafted on the conference room table and, above and beyond the sparring between LBJ and MLK, was the indispensable task of mobilizing public opinion to conquer the mountain of congressional aversion to a voting rights bill. In this historic task, it was Rabbi Richard Hirsch (who was on the Pettis Bridge in Selma years later) who mobilized the Reform movement; and it was a Reform Jew, Arnold Aronson, who helped to develop the political savvy and the unstoppable force of public opinion which carried the day. And it was an extraordinary Jewish businessman, named Kivie Kaplan, who saved the NAACP from financial collapse just when that organization was most needed by the country. He also underwrote the newly established Religious Action Center and provided space for the Leadership Conference on Civil Rights in that new facility.

Indeed, I used to say that the two engines of the civil rights movement were blacks and Jews.  Many others were brave and loyal allies.  But when the rubber hit the pavement, it was Jewish fundraising which saved King’s Southern Christian Leadership Conference; it was Jewish youngsters who made up a majority of Mississippi Summer volunteers; it was rabbis like Si Dresner who filled up the jails in the South and gave stomach ulcers to their congregational leaders in the North; it was Jewish voters who helped elect black mayors and stubbornly voted for candidates who championed civil rights even in national landslides  going the other way.

So the civil rights struggle was more than a rumble in the jungle between two leaders, as dramatized in the movie. It was, and continues to be, an endless struggle for the soul of America. It is significant that, in the moment of truth, the Congressional Black Caucus and the unofficial Jewish caucus in Congress held together in every vote, despite a growing list of other issues gnawing away at Jewish-black unity. Without the leadership of major Jewish organizations, working with the NAACP and the Urban League under the baton of Bayard Rustin, the March on Washington might have fizzled and MLK might never have soared into the iconic figure we still honor.

Despite the traumas of the Mideast and Israel, and decades-long tensions over affirmative action, Jews and blacks still need each other, although we are now folded into a much broader coalition  of Hispanics, Asians, gays, women, disabled, labor unions and others. If we are slowly being rubbed out of the momentous history of civil rights, it is a bitter insult to King’s constant pride in the Black-Jewish prophetic partnership, his adamant repudiation of anti-Semitism, his strong support for Israel. He would not be happy to see any part of that historic partnership wiped out or neglected by new generations.

Even in the midst of the civil rights drama, many of the Jewish participants realized this was more than sheer altruism.  Enlightened self-interest played a large role. In my case, I grew up in St. Paul, Minnesota at a time when the Twin Cities were called the ‘capitol of anti-Semitism.’ And what changed all that and ushered in the modern, progressive, savvy Minnesota was the civil rights revolution (aided in no small measure by Senator Hubert Humphrey). That revolution smashed down the walls of discrimination and opened the doors of opportunity. It released the energy and talent of those long excluded, including Jews, who quickly moved from the periphery to the center of American life, some becoming presidents of universities and chief moguls of corporations where Jews had long suffered  quotas, ostracism and exclusion. So it is not a plot against the Jews. It is the amnesia of history, the supremacy of now, the deification of me.

So bless the movie Selma for keeping alive one of the compelling chapters in American history.  Too bad they left Rabbi Heschel and the Jews on the cutting room floor. 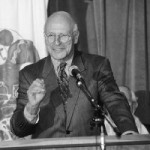 Al Vorspan is the Senior Vice-President Emeritus of the Union for Reform Judaism and for 50 years served as the Director of its Commission on Social Action.